Indonesia under fire for light sentences in Islamic sect attack 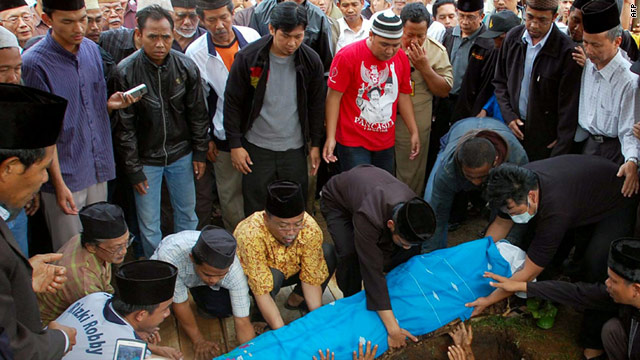 Jakarta, Indonesia (CNN) -- An Indonesian court Thursday convicted 12 Indonesians to sentences of six months or less for their roles in a mob attack that killed three followers of a minority Muslim sect.

The attack also injured five followers of the Ahmadiyah, a minority Muslim sect.

Critics decried the sentences as too light and a blow to religious freedom in Indonesia.

"This trial is obviously engineered. This is a case of torture, murder, where is the justice?" said Muhamad Ahmad, who was injured in the assault.

In February, a mob of people wielding knives and stones attacked about 25 Ahmadiyah members in Cikeusik, Banten province.

The crowd opposed the presence of the sect in the village and demanded the group stop its activities.

Many Muslims consider the sect -- which believes Mohammed is not the last prophet -- as holding heretical beliefs.

Amateur video of the incident showed people pummeling what looked like lifeless bodies with sticks and rocks. The video was posted on the Internet, fueling public outrage.

Ahmad said he was not called to testify.

"Seeing their sadistic behavior toward us, chopping up bodies, kicking, hitting and stabbing us. Some of them (victims) were even burned. We didn't get call. They only called defense witnesses," he said.

The 12 attackers faced multiple charges but no one was charged with murder.

Human Rights Watch called the verdicts a setback for religious freedom in Indonesia.

The rights group said police did not not conduct a thorough probe and prosecutors did not call key witnesses.

Deden Sujana, a member of Ahmadiyah who survived the assault, is facing a six-year jail sentence for his alleged role in provoking the attack. He faces charges of incitement, disobeying police orders and maltreatment.

"Indonesian authorities should be making all-out efforts to bring to justice those who kill people because of their religious beliefs," said Elaine Pearson, deputy Asia director at Human Rights Watch.

"The Cikeusik trial sends the chilling message that attacks on minorities like the Ahmadiyah will be treated lightly by the legal system."

Defense lawyer Agus Setiawan, however, says the court was unfair toward the defendants.

"I do not know who has to be responsible for the death of the victims. This was not a case of persecution, it was a clash. The defendants should have been set free."

With the short sentences and time spent in jail, the 12 men may soon be released.

In 2008, Indonesia issued a joint ministerial decree prohibiting the sect -- which has about 200,000 members in the nation -- from spreading its beliefs.

Since then, hardliners have taken the law into their own hands, at times attacking the sect's followers nationwide.

Human rights activists have called on the government to revoke the decree.

The Setara Institute for Peace and Democracy, a local human rights organization, noted an increase in attacks against Ahmadiyah and other minority religions in Indonesia in recent years.

The U.S. Embassy in Jakarta and a European Union delegation also decried the light sentences.

"The United States encourages Indonesia to defend its tradition of tolerance for all religions, a tradition praised by President (Barack) Obama in his November 2010 visit to Jakarta," the embassy said in a statement.

The most populous Muslim country in the world, Indonesia has been touted as an example of tolerance and democracy in the Islamic world.

But a 2009 study from the Pew Forum on Religion & Public Life in Washington indicated it was among the most restrictive countries when it comes to religion.