India, Pakistan to begin new round of talks to build trust 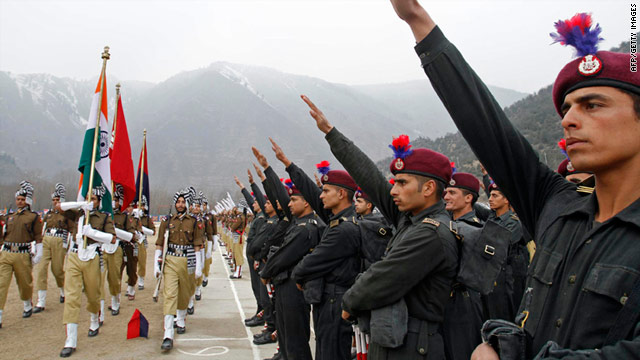 Indian troops march in the Kashmir Valley, an area of dispute since the independence of India and Pakistan in 1947.
STORY HIGHLIGHTS
RELATED TOPICS

New Delhi, India (CNN) -- India and Pakistan are set to open a new round of talks this week in the latest attempt by the Asian rivals to build mutual trust.

No breakthroughs are expected in the bitter disputes that divide the nuclear neighbors, but some progress might come in the area of Kashmiri trade.

On her arrival in India Tuesday, Pakistan's Foreign Minister Hina Rabbani Khar struck an optimistic note about the prospects of relations between the neighbors.

"(I) hope that these two countries will have learned lessons from history, but are not burdened by history and we can move forward, forge forward as good friendly neighbors, who have a stake in each others' future and who understand the responsibility that both the countries have to the region and within the region," she said, a day before her meeting with her Indian counterpart S.M. Krishna.

Top bureaucrats from the two sides were in discussions in the Indian capital, New Delhi, ahead of Wednesday's talks. Indian and Pakistani officials have exchanged ideas on how to improve trade and travel across Kashmir -- the disputed region divided between the countries.

The current three-year agreement involves 21 locally made items, but business groups have been demanding expansion in the list of products. They'd also like to see an introduction of banking facilities, and improvements in communications and infrastructure.

A senior Indian official, in a background briefing, said some announcements on boosting trade across Kashimir's military line of control were expected as a part of confidence-building measures between the two countries.

The nuclear-capable neighbors have fought three wars since the partition of the Asian subcontinent in 1947, two of them over Kashmir, which both nations claim.

Earlier this year, New Delhi and Islamabad agreed to resume peace talks frozen by the 2008 Mumbai terror attacks, which have been blamed on Pakistan-based militant groups.

Under U.S. pressure, Indian and Pakistani leaders held meetings last year in a bid to put the fragile peace process back on track, but no dramatic headway has been made in settling outstanding issues.

In 2004, the nations agreed to negotiations that cover eight issues, including Kashmir, terrorism and Pakistan's concerns over river dams on the Indian side of the border, which it sees as a threat to its water supplies.

Analysts, however, do not foresee immediate resolution of these thorny issues.

"Any immediate breakthrough is not possible. But it's good (that) talks continue," said strategic expert Afsir Karim. "I am more optimistic than before about the positive nature of dialogue."

Since 2004, successive governments have held talks in an effort to end the historical acrimony.

But talks were suspended two months later, in November 2008, after the terror raid on Mumbai that left more than 160 people dead.

The current engagement comes in the wake of another terror attack on Mumbai. Three deadly bomb explosions rocked the city this month, but the Indian government has been careful not to finger Pakistani militants.