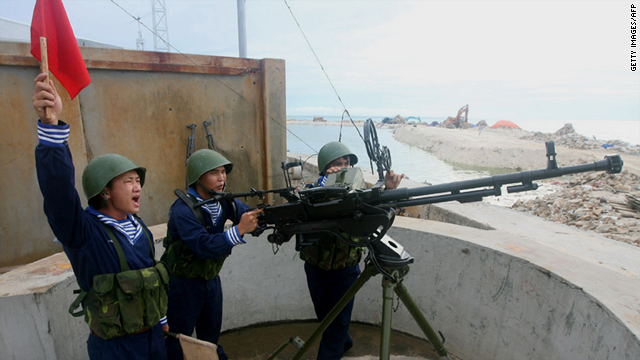 Jakarta, Indonesia (CNN) -- Chinese and Southeast Asian officials have agreed on a draft of guidelines to avert tension in the South China Sea.

China, which had until now resisted taking part in a code of conduct, changed its mind during a meeting with senior officials of the 10-member Association of Southeast Asian Nations, or ASEAN, in Bali, Indonesia, on Wednesday.

"This is an important milestone document on the cooperation among China and ASEAN countries," China's Assistant Foreign Minister Liu Zhenmin told reporters. "And we have a bright future and we are looking forward to future cooperation."

The document, "Guidelines on the Implementation of the Declaration on the Conduct of Parties in the South China Sea," will now have to be approved by the government of China and ASEAN countries.

But all sides called it a hopeful sign toward a peaceful resolution to the overlapping claims in the South China Sea.

Among the goals of the guidelines are a good-faith attempt by all sides to promote dialogue and clearly identify any project they undertake in the disputed region.

The South China Sea -- a 1.3 million square mile patch of the Pacific Ocean bracketed by China and several Southeast Asian nations -- is dotted with hundreds of largely uninhabited islands and coral atolls that are home to some of the world's most diverse marine life.

Also under its waves lie potentially huge reserves of natural gas and oil. A Chinese estimate suggests as much as 213 billion barrels of oil lie untapped in the South China Sea which, if true, would make it the largest oil reserve outside Saudi Arabia, according to the U.S. Energy Information Administration.

That prospect has cross-stitched the sea with competing claims from China, Vietnam, the Philippines, Malaysia, Brunei and Taiwan. A recent spate of incidents between Chinese and Vietnamese vessels in the sea has fueled a growing rift between the communist neighbors, creating strange bedfellows as Hanoi embraces closer military ties with historic foes in Washington.

In late May, the Vietnamese Ministry of Defense reported that a Chinese patrol boat slashed a submerged cable of a oil and gas survey ship operated by PetroVietnam, the state energy firm.

Vietnam is not the only nation skirmishing with Chinese patrol boats.

The Philippines, on the western border of the South China Sea, also reported Chinese boats cutting cables of a survey ship and threatening to ram its boats in March, according to Manila's Foreign Ministry.

China claims both nations were exploring in disputed waters. China says it is not to blame.

"If you want to know why there is tension in South China Sea, I think you have to go and ask the country or countries that have made all the provocations," Cui Lei, China's vice minister of the Foreign Ministry, told CNN in a rare interview last month.

China claims there could be enough oil and gas to rival Saudi Arabia's reserves, but those claims have yet to be proven, according to a U.S. Energy Information Administration report. Still, there are enough proven wells in the South China Sea to tantalize the players, which explains why oil and gas survey vessels are at the heart of the recent incidents.

The smaller nations in the region are feeling the pressure to stake their claims for oil and fishing rights, or risk losing them to a more assertive China, analysts say.

"There's a sense coastal states like Vietnam and the Philippines need to use the economic area more urgently, so they need to catch more fish now, they need to discover more oil now," said James Manicom, an expert on maritime disputes at the Balsillie School of International Affairs in Waterloo, Canada.

At the heart of both disputes is a term of international maritime law known as "Exclusive Economic Zone," where nations are allowed sole rights to fish and develop resources within 200 nautical miles of a country's shores. That has created interest in nations' grabbing uninhabited islands -- often little more than rocky atolls -- to extend their zone.

China lays the broadest claim, covering all of the Spratly Islands in the southern part of the ocean and Paracel Islands to the north -- essentially most of the South China Sea. Taiwan and Vietnam also claim the entirety of both island groups, while Malaysia, Brunei and the Philippines say they own part of the Spratlys. All but Brunei occupy some of the disputed islands with naval bases, airstrips and even resorts.

The United States waded into the water dispute a year ago when Clinton attended the annual defense meeting in Singapore. Clinton rattled Beijing when she offered to mediate the dispute and suggested a peaceful outcome was in the United States' national interests. At the time, Chinese Foreign Minister Yang Jiechi called Clinton's comments "an attack on China."

The shipping lanes of the South China Sea are among the busiest in the world and a vital lifeline for China's growing hunger for commodities such as oil, natural gas and iron ore.

CNN's Kevin Voigt and Natalie Robehmed contributed to this report.