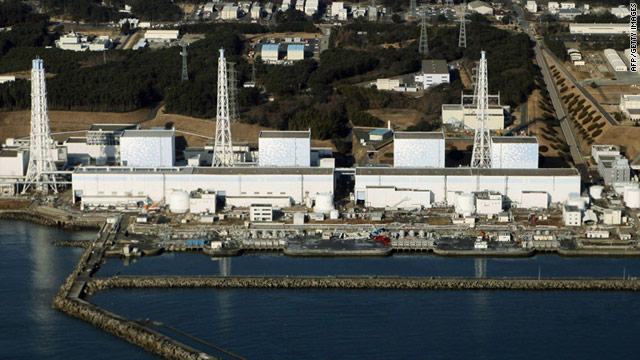 Workers are building a protective cover for the Fukushima nuclear power plant, pictured in March, before a typhoon.
STORY HIGHLIGHTS
RELATED TOPICS

Tokyo, Japan (CNN) -- Workers in Japan scrambled Monday to build a protective covering over a damaged nuclear reactor ahead of an approaching powerful typhoon, an energy company spokesman said.

Typhoon Ma-on -- currently a "Large" and "Very Strong" storm, according to the Japan Meteorological Agency -- should strike Japan well south of the damaged no. 3 reactor at the crippled Fukushima Daiichi nuclear power plant.

But the Tokyo Power Company, which is responsible for the plant wracked by the March 11 tsunami that struck northeast Japan, is constructing a "roof-like structure to prevent rain from entering holes on the turbine building," said spokesman Satoshi Watanabe.

Typhoon Ma-on is predicted to make landfall Tuesday, according to the country's meteorological agency.