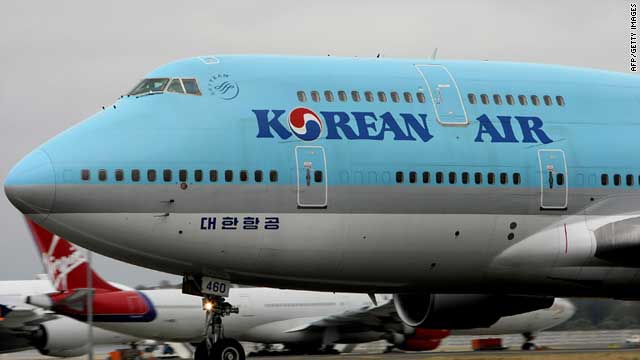 Korean Air carried out two test flights over the islets in the sea east of Korea less than a month ago.
STORY HIGHLIGHTS
RELATED TOPICS

Seoul (CNN) -- South Korea demanded Tokyo withdraw a ban that asks Japanese diplomats to refrain from flying with Korean Air to protest a test flight above islets in the sea east of Korea that Japan claims is its territory.

"The government is taking this seriously, as the Japanese government in effect is placing sanctions on one of our private companies," the South Korean foreign ministry spokesman said in a briefing Thursday.

The islets in the sea east of Korea, known as Dokdo in Korea and Takeshima in Japan, have been a prickly issue for the countries.

Japan has long claimed the islets as its territory, but Seoul leaves no room for debate and says all Korean territory was returned after the country won independence from colonial rule by Japan in 1945.

The Japanese government has shown no intention of stepping down from its recent move.

"Because Korean Air did a domain invasion to our Takeshima clearly this time, we have expressed our strong intention regarding this problem with Korean Air," the Japanese deputy foreign minister said.

South Korea said it will consider various measures if Tokyo does not withdraw the measure that goes into effect Thursday.

Seoul expressed strong disappointment at the move, saying it should not have been made given the relationship between the two countries.

Korean Air, the country's largest airliner, carried out two test flights over Dokdo less than a month ago but did not comment on the Japanese government's decision.

South Korea views the islets as a source of national pride and has taken various measures to reassert its ownership. The land is largely uninhabited with only seven registered residents.