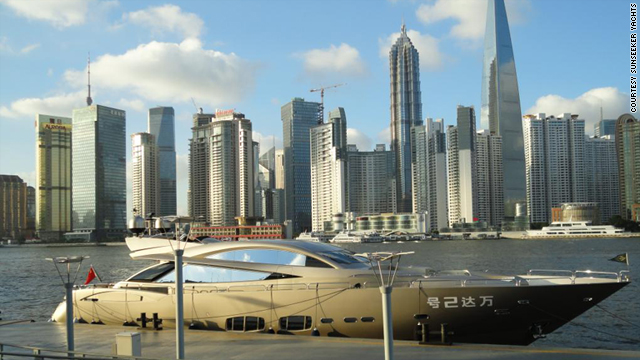 The Sunseeker Predator 108 Special Edition, pictured in the port of Shanghai.
STORY HIGHLIGHTS

(CNN) -- As China's super rich grow ever richer they need new toys to play with. Now, some are betting that superyachts will be the next big thing for those Chinese millionaires wanting to show off their bling.

"There's no question that Chinese have the appetite and the deep pockets for a thriving yacht culture," says Traugott Kaminski, China CEO for upmarket yacht firm Sunseeker -- which was one of the first to enter the then almost non-existent market back in 2003.

Now the company says it is about secure a deal worth up to $33 million, selling five yachts to a mainland Chinese customer. And with recent figures showing that Asia's economic giant has over 875,000 millionaires there could plenty more orders to come.

There's certainly ample room for growth. According to figures cited by state media, there are about 1,300 private yachts in China. This compares to 17 million privately owned recreational boats in the United States, the world's biggest yacht market, according to industry publication International Boating Industry.

But where some see China as a yacht-seller's paradise, others are more cautious.

"In 2010 China only imported about 100 yachts -- that's not a lot when you consider the country's wealth and population," says Bart Kimman, Dutch CEO of Asia Yacht Services, a Hong Kong brokerage firm tailored to the growing Asian market.

While Kimman stresses that demand has certainly increased from next to nothing only two years ago, he believes that the Chinese market is still strangled in a net of prohibitions.

It's like European wine in China -- in the beginning no one drank it ... now finally there is a big market.
--Dr. Keyu Jin, LSE
RELATED TOPICS

He argues that modern yachts need modern marinas, with properly trained staff -- "But who wants to invest millions in a high-tech marina," he asks, "only to find out that you have to rebuild the whole thing because of an obscure regulation?"

A 42% tax on imports of foreign yachts is also proving prohibitive, he says. "OK, so a rich guy is a rich guy, but if he wants to buy a $5 million toy and he's facing the prospect of paying another $2 million in tax ... he's going to think twice!"

Dr. Keyu Jin is an assistant economics professor at the London School of Economics. She says trailblazing Chinese trend setters will need to take up yachting before it really takes off.

"How do you jump-start a hobby?" she asks. "It's like European wine in China -- in the beginning no one drank it, then a very few people started drinking a particular French brand, now finally there is a big market. It's a herd mentality." she says.

Jin adds that there are cultural barriers that may delay the yachting revolution.

"While some of China's rich are happy to spend their money on lavish things, others have a more traditional view about ostentatious displays of wealth," she says.

"'Big trees attract more wind' is the old saying, and the Confucian view that the more conspicuous you are the more risks you put yourself into still acts as a sort of restraint for many."

She adds: "Unlike Brazil -- another emerging market for yachts -- Chinese people don't like beaches much, they don't like the sun and they're not interested in getting a tan."

But Kaminski is fully undeterred. "Sure, Chinese will use the boat differently to their counterparts in the West," he says. "In my dealings there is a greater emphasis on the safety and stability, and our customers prefer a hard-top roof to shield them from the sun. Karaoke rooms are also very popular -- this is all just a matter of different tastes."

According to the Sunseeker CEO, the Chinese market will eventually be bigger than the whole European market put together. "You cannot expect this in five years -- there are still these problems with infrastructure and so on," he says. "But once these issues are solved -- which they will be -- then the floodgates will open."