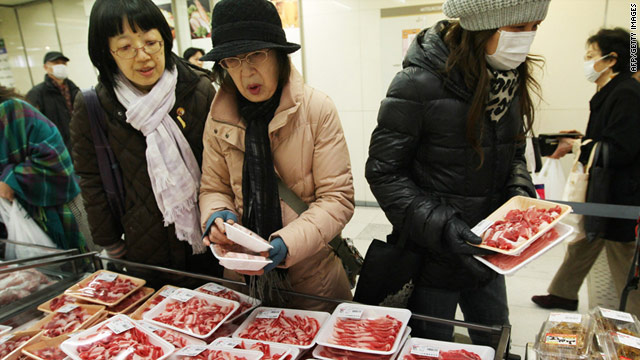 Japanese buy meat at a newly reopened department store in the city of Sendai on March 23, two weeks after the earthquake.
STORY HIGHLIGHTS

Goshi Hosono, state minister in charge of consumer affairs and food-safety, said he hoped to head off any overreactions.

"If we were to eat the meat everyday, then it would probably be dangerous," Hosono said at a news conference Tuesday. "But if it is consumed only in small portions, I don't think it would have any long-lasting effects on the human body."

The meat, delivered late last month, has made its way to consumers and most likely has been ingested, the Tokyo Metropolitan Government said Monday evening. This was preceded by another recent discovery of radiation in the meat of 11 cows delivered to Tokyo from the same farm.

The discovery was made when Tokyo's office of health and welfare investigated six deliveries made at the end of June from a Fukushima farm. So far, radiation has been confirmed from three out of the six cows. In one case, radiation reached 3400 Becquerels, which is about seven times the limit set by the government.

When the Fukushima Prefectural Government, on Monday, investigated the farm from which the meat was delivered, cesium was found in cattle feed such as hay, with radiation levels as much as 57 times higher than the ceiling set by the Japanese government.

Yutaka Kashimura, Fukushima Prefecture's officer in charge of the livestock division, told CNN that the farmer may have given the cows hay that had been exposed to soil containing high levels of radiation. The farm is situated at about 30 kilometers (18.6 miles) from the damaged Fukushima nuclear plant.

The Fukushima Prefectural government announced that it will check on all the farms in the prefecture to determine if the stored cattle feed is being protected from radiation. More than 500 farms will be inspected before the end of the week and nearly 2,800 by the end of the month.

On Saturday, the health and welfare office at Tokyo Metropolitan government found that meat from 11 cows from a Fukushima farm, which was about to be delivered, contained high levels of radiation. As a precaution, the office was ordered to trace meat from six cows from the same farm and realized that the meat is now circulating not only in Tokyo, but all over Japan.

No health problems linked to the incident been reported, the Tokyo Metropolitan Government told CNN.