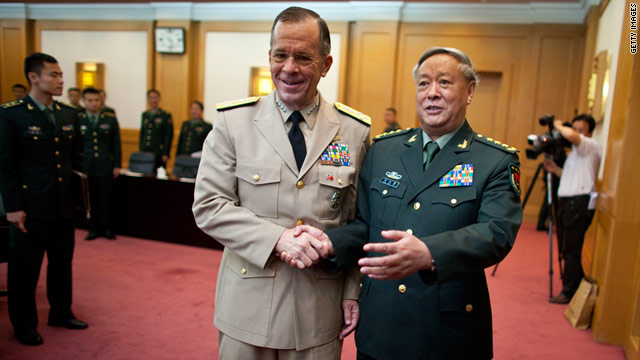 Beijing, China (CNN) -- One day after the top American military officer declared that China "has arrived as a world power," his Chinese counterpart Monday played down the capabilities of the 3 million strong People's Liberation Army while criticizing the role of U.S. armed forces in the Asia Pacific region.

Calling $700 billion a year in U.S. defense spending six times the Chinese budget, Gen. Chen Bingde, the PLA's chief of the General Staff, brushed aside notions that China would challenge America's military supremacy by building its own aircraft carriers while developing carrier-killing missiles.

"We are still 20, 30 years behind the United States, no matter how much we have developed," he said at a joint press briefing with Adm. Mike Mullen, chairman of the U.S. Joint Chiefs of Staff.

Chen was blunt in expressing China's view on the United States conducting two military exercises in the Asia Pacific region -- with the Philippines and Vietnam, respectively -- amid rising tensions over territorial disputes in the South China Sea.

"We think the timing of those joint exercises is inappropriate," he said.

Mullen, in China for a rare four-day visit to promote military-to-military ties, pointed out to his host that such war games were long planned and small in scale.

"It's not that difficult to change the schedule," Chen responded.

China, Vietnam, the Philippines, Malaysia, Brunei and Taiwan all have competing claims to parts of the 1.3-million-square-mile patch of the Pacific Ocean. The vast area of waters, dotted with partially submerged atolls and reefs, contain some of the world's busiest shipping lanes and are thought to hold large deposits of oil and natural gas.

The United States officially stays neutral in the disputes, but Secretary of State Hillary Clinton has angered China since she declared last July maritime freedom in the area a U.S. national interest and expressed willingness to facilitate multilateral talks on the issue.

"In the South China Sea, freedom of navigation has never been a problem," he said. "It serves as an excuse to sensationalize the issue."

"Some countries might be thinking of relying on U.S. support to address the issue -- that's not realistic," he added.

Chen pledged to work for a peaceful resolution to the disputes but showed clear irritation at "frequent, close-in reconnaissance activities by U.S. planes and ships against China," calling them unnecessary and counterproductive to improving military relations.

Mullen, whose visit marked the first of its kind in four years, started his trip Sunday. He has addressed university students in Beijing, visited normally top-secret missile force facilities and met the Chinese vice president.

Despite his assertive tone, Chen described his country -- already the world's second-largest economy -- as a poor one due to its population of 1.3 billion people. He reassured the audience that China would use its newfound strength only for self-defense and the improvement of global security.

"Our sole purpose is to make China a better country and the Chinese people live happier lives," he said. "If we spend too much money on the military, the people won't agree."

The top general of the world's largest military force apparently even keeps the welfare of American taxpayers in mind.

"I know the U.S. is still recovering from the financial crisis," Chen pondered aloud at the joint press briefing. "But it's still spending so much money on its military -- isn't that placing too much pressure on the taxpayers?"

"If the U.S. could reduce its military spending a little, and spend more on improving the livelihood of the American people and doing more good things for the world -- wouldn't that be a better scenario?"