New Defense Secretary Panetta: We have al Qaeda 'on the run' 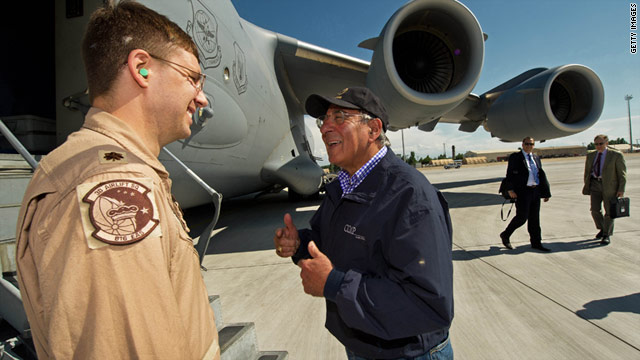 Check out the Afghanistan Crossroads blog for the latest in the war-torn country.

"I think we have them on the run. I think now is the moment, now is the moment following what happened with bin Laden to put maximum pressure on them because I do believe that if we continue this effect that we really can cripple al Qaeda as a threat to this country," Panetta said.

He made these assertions to reporters on Saturday before he landed in Afghanistan, where he met with Afghan President Hamid Karzai and Gen. David Petraeus, currently head of the NATO International Security Assistance Force and U.S. forces in Afghanistan.

Speaking to reporters after he met with Panetta, Petraeus said there is "a real prospect for this kind of strategic dismantling."

"The brand will be out there," Petraeus said of al Qaeda, but he asked whether the militant group would be able "to pursue effective attacks."

Panetta will begin tackling the challenge of war against militants in Pakistan and Afghanistan as the U.S. starts to draw down troops. Approximately 33,000 U.S. "surge" troops are expected to be withdrawn from Afghanistan by next summer, with the remaining 68,000 leaving by the end of 2014.

Panetta said he and Karzai have a good relationship and spoke of strategy and the nations' partnership. The Afghan president did not raise the issue of civilian casualties.

The former director of the CIA, Panetta said operations against militants "have undermined their ability to conduct 9/11 attacks."

"Having gotten bin Laden, we've now identified some of the key leadership within al Qaeda, both in Pakistan as well as in Yemen and other areas," Panetta said. U.S. Navy SEALs killed al Qaeda leader Osama bin Laden in a raid in Pakistan on May 2.

He wouldn't list names of al Qaeda leaders, but said there are about 10 to 20 key leaders among Pakistan, Yemen, Somalia and al Qaeda in the Islamic Maghreb in North Africa.

"If we can go after them I think we really can strategically defeat al Qaeda," Panetta said, adding that targeting al Qaeda leadership has also helped counter their ability to raise money.

Ayman al-Zawahiri had been bin Laden's second in command and now is the leader of the group. Panetta said he and others believe that al-Zawahiri "still resides" in Pakistan's tribal region.

"He's one of those that we would like to see the Pakistanis target along with our capabilities as well," he said, noting that Pakistan has helped identify militant provinces.

Panetta also said threats to the United States come more from Yemen and people like U.S.-born Anwar al-Awlaki, a top figure in al Qaeda in the Arabian Peninsula, al Qaeda's arm in Yemen.

There have been reconciliation efforts with militants to end the Afghan conflict. Panetta said he believes that "maximum pressure" on the Taliban and al Qaeda and targeting "principal leaders" can eventually serve to influence to "some future settlement."

"It's key to keep the pressure on now," he said.

Panetta will also be overseeing the completion of the U.S. withdrawal from Iraq this year and be responsible for managing limited U.S. involvement in the NATO-led campaign in Libya.

Panetta replaced Robert Gates as defense secretary, and Petraeus will replace Panetta at the CIA.

In his remarks, Petraeus said there have been strides made against militants in recent years in part by close coordination of military and intelligence, citing the bin Laden raid in Abbottabad, Pakistan, as an example.

He said the Afghan military is performing better and pointed to the security forces' performance after a recent hotel attack in Kabul. Also, he said there have been fewer insurgent attacks this year in May and June compared to those months last year.

He believes that al Qaeda in the Arabian Peninsula "probably bears the closest watching right now," but he thinks they are not able to "carry out strategically important attacks." The al Qaeda terror movement was harbored by the Taliban government in Afghanistan when it attacked the United States on September 11, 2001.