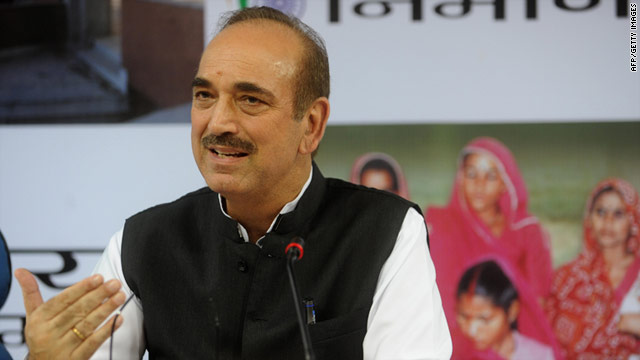 New Delhi (CNN) -- India's health minister said Tuesday he was misquoted by the media in comments made at an AIDS conference that homosexuality is "unnatural" and a "disease" that was brought into India.

Ghulam Nabi Azad told reporters that his remarks were intended to urge those who engage in homosexuality to be careful.

"Unfortunately, there a disease in the world and which has come to our country which is absolutely unnatural and should not happen but it does," Azad said at a New Delhi conference on AIDS and HIV.

There is a substantial number of men having sex with men in our country. But it's difficult to track who's doing it and where.
--Indian Health Minister Ghulam Nabi Azad.
RELATED TOPICS

"There is a substantial number of men having sex with men in our country. But it's difficult to track who's doing it and where," he said in a speech delivered in Hindi.

Azad's comments drew criticism from gay rights activists and those who fight HIV in India.

"I think his statement is very irresponsible, more so because of the platform he was speaking from," said Anjali Gopalan, executive director of the nonprofit Naz Foundation that fights for sexual rights.

"The minister should have used that platform to end stigmas. Rather he chose it to reinforce the negative stereotypes," she added.

Roy Wadia, the executive director of India's Heroes Project, said Azad's comments "not only undermines the ministry the person leads, but strikes a significant blow to health and outreach programs aimed at an already vulnerable and stigmatised population."

Wadia, whose HIV/AIDS communications and advocacy organisation is funded by the Bill and Melinda Gates Foundation, welcomed the outcry against Azad's comments.

"That is encouraging," he said. "But we clearly have a ways to go in educating society as a whole when the top health official of the world's most populous democracy utters such words and does such harm."

The United Nations AIDS agency, which estimates 2.5 million Indians are living with HIV, reiterated its position on homosexuality.

"There is no place for stigma and discrimination on the basis of sexual orientation," said Michel Sidibe, executive director of UNAIDS, in a statement Tuesday as he praised India's overall efforts in providing HIV services to gay and transgender communities.

"Consistent with WHO's disease classification, UNAIDS does not regard homosexuality as a disease," Sidibe added.

The ruling meant the law -- Indian penal code section 377, which had criminalized consensual homosexual acts between adults -- was partly overturned but remains in place where forced homosexual acts are concerned.

Tuesday, Amnesty International said India must do it all it can to protect the rights of gay citizens.

The rights group said the health minister ought to retract his comments.

"India has come a long way in the past decade in protecting its vulnerable populations, including its lesbian, gay, bisexual and transgender populations," Gray said. "But they are engaging in double standards here: On the one hand, they have decriminalized homosexuality and taken a significant step toward ensuring that people in India can express their sexual orientation. On the other hand, its chief public health officer is pathologizing homosexuality."

CNN's Moni Basu contributed to this report from Atlanta.