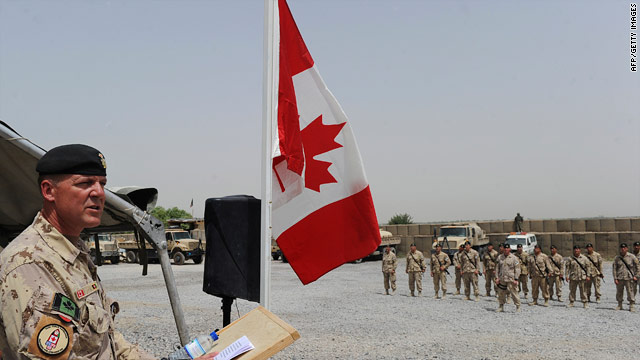 (CNN) -- Canada is formally completing its fighting mission in Afghanistan this week, a move that marks the end of a robust combat presence centered in the dangerous and violent southern province of Kandahar.

The Canadian military on Tuesday formally transferred its last district in the province to the United States, where the U.S. 3rd Battalion 21st Regiment took over from the Canadian 1st Battalion, Royal 22nd Regiment.

This transition comes as other countries make preparations for drawdowns and shifting to plans for non-combat missions in Afghanistan, such as training.

U.S. President Barack Obama recently announced the withdrawal of 33,000 American troops by the end of next year.

France announced that it would also begin to reduce troop numbers, saying it "will initiate a progressive withdrawal of troops in Afghanistan, and will follow a timetable comparable to the withdrawal of the American troops."

One of more than 40 countries participating in NATO's International Security Assistance Force with nearly 3,000 troops, Canada has lost more than 157 troops in the war, the third highest death toll after the United States and Britain.

The grinding conflict has been frustrating for many Canadian citizens, frustrated by the mission's casualties. Prime Minister Stephen Harper planned an end to the combat mission three years ago.

Also, the government says, the "incremental cost of the current mission in Afghanistan to the Government of Canada from 2001 to 2011 is currently estimated to be approximately $11.3 billion."

"Through their operations there to cut off terror at its root, our men and women in uniform have made an enormous contribution to Canadian security abroad," said Harper, in his reaction to the killing in May of al Qaeda leader Osama bin Laden.

A transition unit of about 1,500 soldiers will be "packing and shipping all of our equipment, materiel and vehicles back to Canada" in the coming months, said Capt. Jennifer Stadnyk, spokeswoman at the Canadian Expeditionary Force Command in Ottawa, the Canadian capital. The plan is to have everything out and these troops home before Christmas, she said.

In the future, training of Afghan security will be the focus.

Up to 950 Canadian armed forces trainers and support personnel eventually will be based in Kabul until 2014. The Canadians will be working alongside Americans, Brits, Australians and others in a countrywide training mission, Stadnyk said.

Also, the government said, 45 members of civilian police forces will help mentor the Ministry of Interior and the Afghan National Police.

"What's interesting about this is the direction we kind of laid out in 2008 is actually now where NATO as a whole has gone, and everybody now is increasingly moving towards 2014, to moving towards training missions, giving the Afghans greater responsibility for their own security," Harper said in an interview with Canada's National Post newspaper last month.

"We will remain engaged on development and on diplomacy and on particular humanitarian issues, particularly the rights of women and children, education, these kinds of priorities. But we are looking for a military role to be a training role, a behind-the-wire role, and to make the Afghans responsible for their own country, and that's where it's headed."