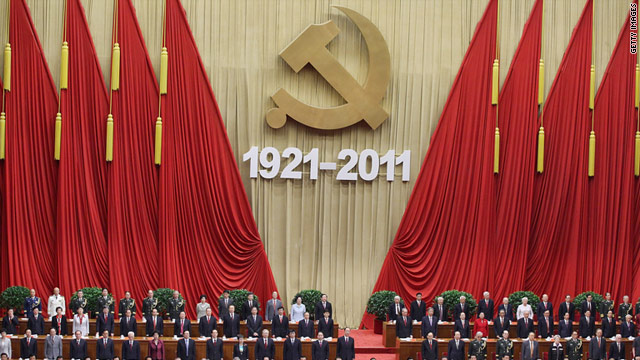 "The Party is soberly aware of the gravity and danger of corruption," said Hu Jintao, who as president also serves as general secretary of the Communist Party of China. He warned that fighting corruption remains "a major political task the (communist) party must attend to at all times" to ensure survival.

Hu spoke in a meeting marking the 90th year anniversary of the CPC. Over 6,000 invited guests, mostly top communist and government leaders and prominent party members from all walks of life, gathered in the cavernous Great Hall of the People for the gala event.

For the occasion, the podium was bedecked with a giant CPC emblem, hammer and sickle, and several red flags.

Hu delivered the keynote speech that lasted more than one hour.

But he also warned that the party is facing "long-term, complicated and severe tests in governing the country." The major challenges for the party, he pointed out, includes "lacking in drive, incompetence, divorce from people, lacking in initiative, and corruption."

To cope with these "growing dangers," Hu urged the party to "police itself and impose strict discipline on its members." He stressed that the party's survival largely depends on "cracking hard on and effectively preventing corruption." If not handled properly, he warned, corruption will "cost the party the trust and support of the people."

In 2010, according to Central Commission for Discipline Inspection, the CPC's anti-corruption body, 146,517 party members were punished for corruption. Among them, 5,373 were criminally prosecuted. High-profile corruption cases involving senior officials, experts say, have dented the CPC's reputation and popularity.

Still, the CPC remains the biggest ruling political party in the world. It boasts of more than 80 million members, or 16% of China's 1.3 billion population.

Among them 24.3% are below 35 years old, and 37.1% have college or higher educations, according to Qinfeng Wang, the vice minister of Organization Department of the Central Committee of the CPC.

Hu called on "outstanding individuals in all fields", especially among the youth, to join as party members.

One of CPC's challenge, experts say, is how to attract young Chinese, especially those who were born after 1980, many of who perceive the CPC as irrelevant to their daily lives. "The whole party must care about young people, listen to what they have to say," Hu said, because the young people "represent the future and the hope of the party."

Hu also acknowledged the zigs and zags the CPC took in its 90-year evolution. "We made mistakes and even suffered severe setbacks in some historical periods," he said. Hu didn't elaborate on the CPC's setbacks. Instead, he said the cause of those mistakes is that "the guiding principles of the party at the time were divorced from the real conditions in China."

CPC was founded in 1921. It took power in China in 1949 after toppling the Kuomintang (Nationalist Party) regime and founding the People's Republic of China. It has since ruled as the single dominant part in the country.

Under CPC rule, the Chinese government in recent years has been confronting a slew of intractable problems, including corruption, a growing gap between the rich and the poor and environmental degradation. In recent months, the Communist Party has tightened political control after anonymous calls on cyberspace for a Middle-East inspired "jasmine revolution" triggered jitters in the Chinese leadership.

Hu called on the party members to unite and seek social stability. "Without stability, nothing could be done, and even the achievements already made could be lost," he said.