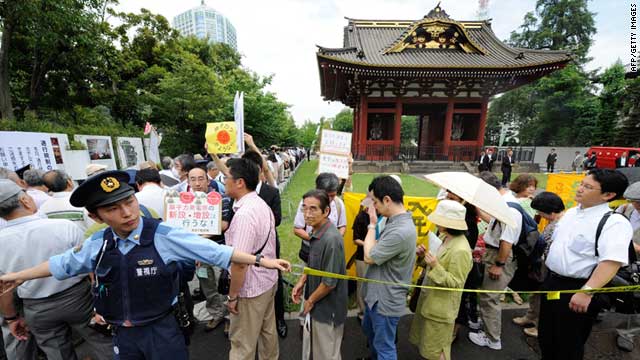 Tokyo (CNN) -- A contentious crowd of Tokyo Electric Power Company shareholders showed up Tuesday for their first meeting since the March tsunami to grill company executives about the future of the embattled company, as well as nuclear energy in Japan.

But in the end, they rejected a motion for the company to abandon nuclear power, according to the Japanese news agency Kyodo, despite plenty of opposition.

"I am against the idea of the board of directors' decision to maintain the nuclear plants. I am here to see that the right decision is taken," said Kazuko Takahashi, as she waited in line to get into the meeting.

"The world is moving in that direction and I don't think TEPCO can resist that forever," she said, referring to anti-nuclear movements in nations like Germany.

Germany's government formally approved a plan this month to close all the country's nuclear power plants by 2022.

Wrapped in a white Tyvek protective suit and mask, similar to the suits worn by members of the clean-up crews at Fukushima Daiichi power plant, Mamiko Nakanishi was urging a general vote in Japan.

Protesters, including several activists from the environmental group Greenpeace, held up a banner that called TEPCO "the worst ever polluting company." They called out to the shareholders: "You can change things, get TEPCO to dismantle their nuclear plants."

Many of the shareholders had never been to a board meeting before. But with TEPCO stocks in freefall -- they are worth about a tenth of their pre-tsunami value -- the shareholders wanted to have their say about plans for the company in which they had invested.

More than three months after the March 11 earthquake and tsunami, TEPCO is still struggling to control the crisis at Fukushima, the worst nuclear accident since Chernobyl in 1986.

Three of the reactors experienced full meltdowns and continue to spew radiation. Recent efforts to decontaminate radioactive water that accumulated in the plant were halted because of continuing technical troubles.