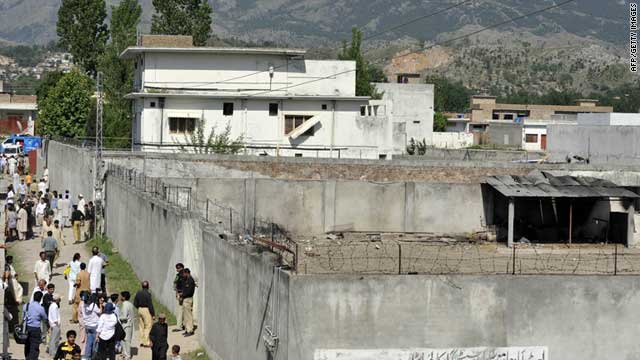 People gather outside the compound of al Qaeda leader Osama bin Laden in Abbottabad, Pakistan, on May 3, 2011.
STORY HIGHLIGHTS

Islamabad, Pakistan (CNN) -- A member of a Pakistani-based militant group is denying a New York Times report that a cellphone found during the raid of Osama bin Laden's compound contains information that links his group to bin Laden.

The member of Harakat-ul-Mujahedeen said he was not aware of support his group gave bin Laden during the years the al Qaeda boss hid at a compound in Abbottabad, Pakistan.

The statement by the man, who did not want his name used because no one in his group is authorized to speak to the media, differs from a recent New York Times report.

The Times report says that Harakat-ul-Mujahedeen also has ties to Pakistani intelligence services.

That information on the cellphone could raise questions about who supported bin Laden when he was in Pakistan, the report said.

A spokeswoman for the U.S. embassy in Islamabad declined comment on the situation Friday, saying, "We don't discuss intelligence issues."

In recent weeks diplomats from the United States and Pakistan have been meeting to help repair the relationship between the two countries, which has been strained since the May 2 raid on the compound that left of bin Laden dead.

The relationship between the two countries has been in a downward spiral over disputes about how to pursue counterterrorism efforts.