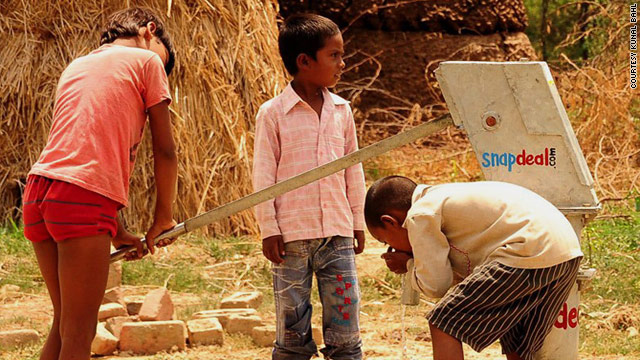 Children of SnapDeal.com Nagar use one of the hand pumps donated to their village.
STORY HIGHLIGHTS

(CNN) -- Residents of a remote village in northern India have few connections to the outside world. They live in mud dwellings with thatched roofs. Electricity is available just two hours a day. And a computer -- well, what's that?

The residents, none of whom own designer watches, eat at restaurants or use computers, wanted to thank SnapDeal for giving them something that they consider a luxury -- water.

The Indian e-commerce company installed 15 hand pumps, so villagers no longer have to walk for miles to quench their thirst. There was no source of potable water.

That was until Kunal Bahl, the founder of SnapDeal.com, decided he would use some of the profits from his burgeoning business to do something good.

The philanthropic project came about after a water-cooler conversation in SnapDeal's offices in New Delhi. One of Bahl's colleagues told him that his family hailed from a cluster of villages about three hours southeast of the Indian capital, where the people had nothing.

It cost us $5,000 max, but it was quite life changing for residents there.
--Kunal Bahl, SnapDeal.com founder

Bahl, 28, went down to Shiv Nagar, met with the village leaders and paid to install the 15 hand pumps.

But Bahl had never imagined just how life-changing. It sank in after the villagers voted to name their hamlet after Bahl's company.

"The intention was not for us to ask for money or anything. They just wanted to express their gratitude," he said.

Their act stood as testament to Bahl of how little the government had done for the people there. He said they told him they only heard from their parliamentary representatives before elections. Then, they were forgotten, people whom a booming India has left behind.

It's precisely people like Bahl who have benefited from India's emerging economic prowess. His company thrives on the pocketbooks of a growing class of wealthy Indians who can afford to buy Reebok sunglasses and get massages at upscale spas.

The irony is that none of this might have happened had Bahl's H1B visa had not expired. The special visas granted to skilled workers are good only for six years. Bahl graduated from the prestigious Wharton School at the University of Pennsylvania.

After his visa ran out, he packed his bags and went home to New Delhi. In February 2010, he launched SnapDeal.com with his partner Rohit Bansal. The company became India's foremost online retailer, selling 10,000 products a day.

And now, it's probably the first e-commerce business whose namesake is an impoversished village, where life goes on pretty much the same as it did centuries ago.

Bahl said he plans to continue his relationship with SnapDeal.com Nagar and help improve the village's infrastructure. Next on the agenda are a couple of computers for the village to use.

"India has about 640,000 incorporated companies," he said. "Many are much larger and more resourced than us. Even if 10 percent decided to do something like this, 64,000 villages would have clean water."

The people of the former Shiv Nagar may not have enough money any time soon to buy a computer, even at a deep discount, but this week, they sure were thankful for e-commerce.