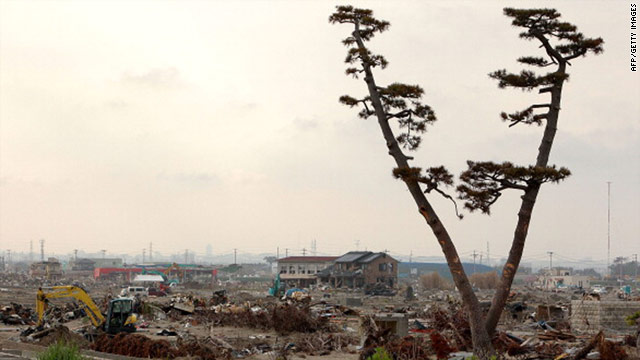 "Wish there was no nuclear power plant. My endurance has come to an end," the note says.

The farmer, in his 50s, then killed himself on the land he struggled to maintain since Japan's tsunami and nuclear crisis began.

The dairy farmer's suicide message was left on the wall of one of the man's barns, members of a local farming bureau said. The man also apologized to his family and friends in the note.

Hiroyuki Ebihara, a member of a local chapter of Japan Agricultural Cooperatives, said he knew the farmer personally and tried to check in with him after the March 11 disaster.

On June 11, Ebihara says, members of his group found the farmer's body.

"The situation here is depressing for everyone," says Ebihara. "We are all in the same situation. Our future with daily farming is unclear, especially since we don't know what the compensation will be. We want TEPCO (Tokyo Electric Power Company) or the government to come out with a clear plan for compensation."

The man had fled Japan with his family to the Philippines after the earthquake and tsunami. He returned to the farm after 10 days to care for his cows. The farmer's family remained in the Philippines until this week when they returned for the man's funeral.

He leaves behind a wife and two children, Ebihara says.

The agricultural sector of Soma -- the farmer's region -- has been deeply impacted by the nuclear crisis at the Fukushima Daiichi nuclear plant.

Japan's government stopped milk shipments from the region in the wake of the nuclear meltdown at the plant. The government lifted the milk ban on April 21, but consumers have been reluctant to purchase dairy products produced near the plant.

A 64-year-old vegetable farmer from Sukagawa City in Fukushima Prefecture also committed suicide in the wake of agricultural bans in the ongoing nuclear crisis. The vegetable farmer hanged himself on March 24, one day after the government issued a ban on Fukushima prefectural vegetables.