Pakistani paramilitary forces to be tried in anti-terrorist court 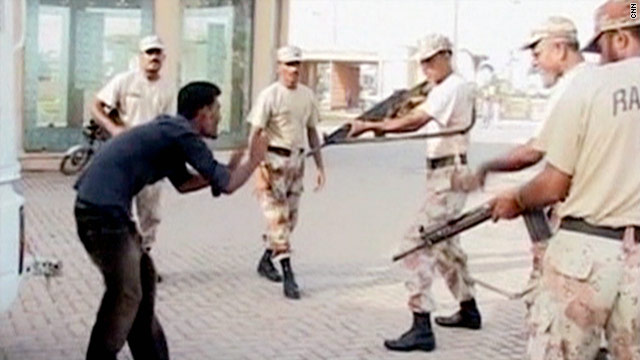 Footage of an unarmed teenager before he was shot by Pakistan paramilitary officials last week.
STORY HIGHLIGHTS

(CNN) -- Six members of Pakistan's paramilitary forces accused of killing an unarmed teenager last week have been turned over to police and will be tried under the country's terrorism act, a police official said Monday.

The Supreme Court has sent the case to an anti-terrorist court, which was ordered to conclude proceedings within a month, said Ahtisham Ali, a senior Karachi police official.

Anti-Terrorist Courts in Pakistan are special courts where hearings are expedited and decisions come more quickly than in the regular court system.

The accused -- members of the Sindh Rangers -- can be seen opening fire on 17-year-old Sarfraz Shah in a chilling video captured by a local television cameraman and broadcast across Pakistan's networks last week.

Before being shot twice, Shah pleads with the men carrying automatic rifles. "I am helpless," he cries. "Please do not fire."

Shah begs to be taken to a hospital before bleeding to death.

The incident was the latest in a series of human rights incidents that has horrified the south Asian nation and deeply eroded public confidence in security agencies.

"This kind of anger among the public and even politicians hasn't been seen before," said Zohra Yusuf, chairwoman of the Pakistan Human Rights Commission.

"It was the way the young man was brutally shot dead in close quarters," she said. "And the footage showed very clearly that he was not armed. The footage itself is so crystal clear. It tells the whole story."

He was handed over to park security and then to the Rangers.

The video shows Shah reaching for their weapons before backing away.

Pakistan's Supreme Court ordered Friday transfers for the heads of the Sindh Rangers and the provincial police force, according to Ikram Chaudhry, a senior Supreme Court lawyer.

"There should be no doubt that this video shows an unjust action," he said. "Action will be taken against the soldiers, but no one should forget he [the victim] is a criminal. He pointed a pistol at two women and then he tried to rob them.

"There are two things -- one, his criminal record, and another, an unjust killing," Malik said. "I assure the relatives of the victim the investigation will be transparent and neutral and the results will be made public. These are the criminals that create problems for the public, but it does not justify killing like this."

Shah's family insisted that the Rangers had killed an innocent man.

"My son was innocent," his mother said. "They killed him."

CNN's Phil Black and Moni Basu contributed to this report.