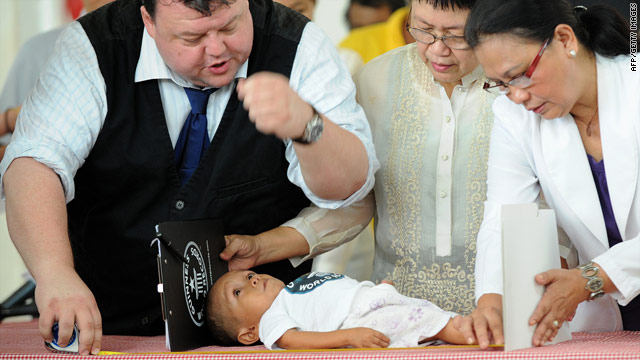 (CNN) -- A man from the Philippines was certified as the world's shortest man this weekend as he reached his 18th birthday, Guinness World Records announced.

Balawing was born a normal size, his family said, and they did not notice anything unusual about him until he was about 4 years old and his peers grew more than he did.

He has not grown since his first birthday, his parents told Guinness.

They are too poor to investigate what medical condition prevented him from growing taller, Guinness said.

But they call him "their lucky charm," saying his father Reynaldo, a blacksmith, had been unemployed until he was born, then found a job after his birth.

"He needs my care every minute of every day. Junrey can only walk with some help and he can't stand for too long because he's in too much pain," his mother, Concepcion, said.

He does not have a girlfriend, he told Guinness World Records editor-in-chief Craig Glenday: "You fool!" he chides in his squeaky high-pitched voice, "Don't even ask!"