Family of American detained in North Korea cheers his release 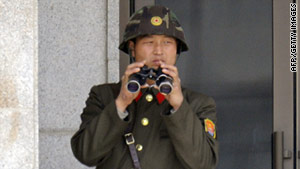 Tensions between North Korea and the West have spiked in recent years due in part to Pyongyang's nuclear program.
STORY HIGHLIGHTS

(CNN) -- The family of an American citizen who was detained for several months in North Korea said Saturday it was ecstatic over news of his release and thanked the U.S. and North Korean governments for the roles they played in it.

"Words cannot fully express how overjoyed we are to be reunited with our husband and father," read a statement from the Jun family that was given to CNN. "We are grateful that the DPRK government has granted our plea for his humanitarian release; further, we sincerely thank them for taking care of his health."

Jun, a Korean-American businessman, was detained for "committing a crime" against North Korea after entering the country, KCNA had reported.

Jun admitted his crime during an investigation, the North Korean news agency said, but it did not specify what crime he had allegedly committed.

"We would also like to express our deep gratitude to the U.S. State Department and Congressman Royce and his staff for their unwavering commitment to protect the welfare of US citizens and to see our family reunited," Jun's family said, thanking Rep. Ed Royce, R-California. The family is from the southern part of the state.

We would also like to express our deep gratitude to the U.S. State Department and Congressman Royce and his staff for their unwavering commitment to protect the welfare of US citizens and to see our family reunited.
--Jun family statement
RELATED TOPICS

Jun's release followed a visit by King, the special envoy for North Korean human rights, and Jon Brause, from the U.S. Agency for International Development. The group went there to assess food shortages that have left thousands starving after floods and harsh weather devastated North Korea's crops.

King and Brause "expressed regret at the incident on behalf of the U.S. government and assured that it would make all its efforts to prevent the recurrence of similar incident," KCNA reported.

"Taking all this into account, the ... government decided to set him free from the humanitarian" standpoint, KCNA said.

State Department spokesman Mark Toner cheered news of Jun's release, but stressed decisions about food aid are in no way related to "any policy decision if you will. It's a separate process all together," he said.

The assessment team traveling with King will continue its work on the ground and "when they come back, we will look at their assessments, study it and compare to other assessments by other "nongovernmental organizations and groups that have made similar trips, to make a decision on the amount of aid to extend, Toner said Friday.

While the United States praised the North for its action, the two countries are still a long way from normalizing relations.

Tensions between North Korea and the West have spiked in recent years due in part to concerns over Pyongyang's nuclear development program.

The United States and South Korea held joint military drills in February, despite North Korea's warning to the South not to carry them out -- calling the exercises a provocation.

South Korea accuses the North of torpedoing and sinking one of its warships in March 2010, killing 46 sailors.

Two State Department officials, speaking on condition of anonymity because they were not authorized to release details, told CNN in April that Jun was a Korean-American businessman who had a visa to enter North Korea.

The U.S. suspended aid two years ago to North Korea because it suspected the donated food was being diverted to the military or not reaching those most in need.

In 2010, Carter helped secure the release of Aijalon Mahli Gomes, a U.S. citizen who was fined about $600,000 and sentenced to eight years of hard labor for crossing over the Chinese border into North Korea. Gomes, who attempted suicide while in North Korean custody, was thought to be a Christian activist.

Two American journalists, Laura Ling and Euna Lee, were arrested after entering North Korea in 2009. They were sentenced to 12 years' hard labor before being released in August 2009 after an intervention by former President Bill Clinton.