Report: Some areas in China under martial law after protests 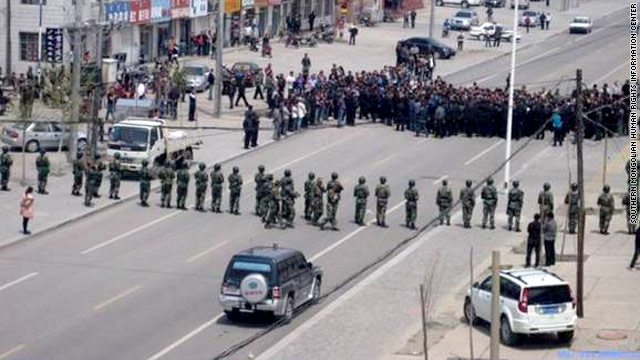 Anti-riot police line up as a crowd gathers in northeastern China on Monday, May 23.
STORY HIGHLIGHTS

(CNN) -- In an apparent response to days of protests, Chinese authorities have declared martial law in parts of the northeast's inner Mongolia autonomous region, according to Amnesty International.

The region has long been the scene of ethnic tension between Mongolians, who have lived in the area for centuries, and the Han people, who arrived in larger numbers after the founding of the People's Republic of China in 1949. Han people are the majority ethnic group in China.

In the report released Friday, Amnesty International detailed protests in and around the city of Xilinhot.

CNN contacted officials in the affected areas, but they declined to comment.

According to the human rights organization, 2,000 Mongolian students took to the streets Wednesday in Xilinhot, in a show of solidarity with an ethnic Mongolian herder by the name of "Mergen," who was killed earlier this month when he was hit by a coal truck that was driven by ethnic Hans.

Amnesty reported that the drivers of the coal truck are both in custody of Chinese authorities.

In a clip posted to YouTube that purports to show that same demonstration, a large group of people, many of whom are young people wearing school uniforms, can be seen walking through the streets.

The students were marching toward the building that houses the regional government, shouting, "defend our land and defend our rights, according to the New York-based Southern Mongolian Human Rights Information Center. The group refers to the area as "southern" -- not "inner" -- Mongolia, and would like to see the region achieve independence or merge with Mongolia.

CNN could not independently verify the authenticity of the clip.

According to Amnesty, the protests, which started Monday, have been largely peaceful, but at least 18 people were reported injured in confrontations with police northeast of Xilinhot, in Right Ujimchin Banner, or Xi Wu Qi in Mandarin.

"The protests are a wake-up call for the authorities. As in other minority areas, authorities must start heeding the message rather than attacking the messengers," said Catherine Baber, Amnesty's Asia pacific deputy director.

Protesters say their culture is under threat as pastoral herders are pushed out from the grasslands and forced to move to the cities, or to places where animal grazing is not possible, according to Enghebatu Togochog, Director of the Southern Mongolian Human Rights Information Center.

He traces the motivation for recent demonstrations to the Chinese central government's efforts, in recent years, to expand coal mining and production in areas that have traditionally been used for grazing.

The demonstrations have been difficult for international media to cover. Jonathan Watts, a correspondent for The Guardian, reported on his Twitter account that police forced their way into his hotel room in Xilinhot "for questioning" at 4:30 a.m. Thursday

"It would be funny if it wasn't for (the) potential hassle for the local people I spoke to. That's (a) major concern," he tweeted later that day.

The next day, he added, "am fine, but still fuming about being woken by two cops standing over my bed at 4:30a.m. Tough to be suitably indignant while naked & groggy."

Watts reported that, as of Thursday, Xilinhot was "not closed," but the site of the Mongolian herder's death was blocked.

On China's social media, talk about the protests was limited. On the popular microblog site Sina Weibo, the search terms "martial law," "Xi Wu Qi" and "Mergen" were all blocked on Friday night.

As is common when sensitive terms are blocked within the Chinese firewall, the result of searching these terms was "in accordance with the relevant laws and policies, the search results cannot be displayed."