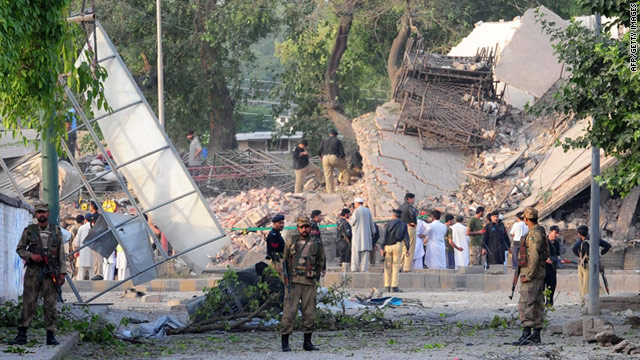 Islamabad, Pakistan (CNN) -- A suicide bomber in an explosive-laden car rammed into a police station in Peshawar, Pakistan, on Wednesday in a Taliban attack that killed seven police officers and injured several others, a senior police official said.

The Pakistani Taliban said the attack was to avenge the killing of innocent civilians. The group's spokesman, Ihsan Ullah, told CNN Pakistani security forces are carrying out those killings on the instruction of the United States in the name of a "war on terror."

Muhammad Ejaz Khan, the police official, said 23 others were injured in the blast.

Khan said several people were still under the debris. About 300 kilograms (661 pounds) of explosive material was used in a minitruck.

Fiaz Tooro, another senior police official of Peshawar, told CNN the building was being used as a Directorate of Counter-Terrorism to interrogate militants. No militants were being questioned or in the building at the time of the blast, he said.

The special police officials who were running the directorate were the target of the blast, Tooro said.

Pakistani Taliban represents a confederation of Taliban groups in northwestern Pakistan, where they are based, said Bill Roggio, military affairs analyst who is managing editor of The Long War Journal.

Those fighters attack targets in Pakistan and across the border in Afghanistan. The group, which is headquartered in Quetta, is different from the Afghan Taliban, which has been focused on re-establishing the Islamic Emirate in Afghanistan.