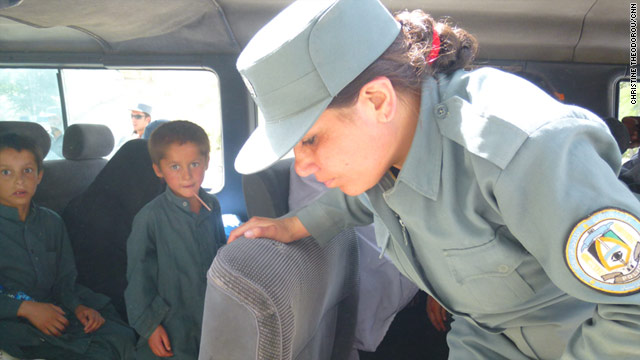 Kabul, Afghanistan (CNN) -- Each workday, Sgt. Pari Gul a mom-of three, stands guard at Kabul's East Gate Checkpoint. In a war torn country as religiously conservative as Afghanistan, her very presence is both a warning to militants and a provocation to hardliners.

Gul works the Pol-e-Chakhri checkpoint at the end of an 80-mile stretch that connects the capital to the largest city in the east, Jalalabad.

The road itself is treacherous, widely considered to be one of the most dangerous in the world.

Twisting mountain roads, deep ravines, no speed limits and military camps along the way are a recipe for terrible road accidents. It is also a route for insurgents crossing the border from Pakistan and heading for Kabul

As one car after another attempts passage through Pol-e-Chakhri, Gul searches women trying to enter Kabul.

"From the time that I started working at police check points I have arrested women carrying weapons, hashish and opium," Gul says with pride.

Her story: A day's work in Afghanistan

But while Gul's male counterparts can easily pull male passengers from their vehicles and pat them down, women are off limits to them.

"It's very necessary to have female police at our checkpoint," says Colonel Abdullah Uriakhil, Special Operations Corps Commander for Kabul Entrance Gates, "because the men here are not allowed to search the females."

Women like Gul are at the forefront of this effort, and they're not just on the lookout for female criminals.

Male insurgents have tried to disguise themselves by hiding under the burqa, knowing they would elude a search if male officers were convinced they were female and unable to lift the veil.

Gul says: "It is very important for the females to work as policewomen, to serve her country and to bring peace into her country."

In this profession dominated by men, Gul and other Afghan women just like her aren't simply trying to protect their fellow citizens -- they're also seeking to change people's perceptions.

For even though the government here supports the training and hiring of more female police officers, many in Afghanistan are unhappy to see women working with the security forces, feeling that it flies in the face of cultural conventions and an Islamic ideology that frowns upon the mixing of the sexes.

Gul, keenly aware of the sensitivities at play in this society, knows how delicately she must perform her duties.

"I have faced resistance many times," says Gul, who must physically enter the cars passing through the checkpoint, pull up burqas and pat down the female passengers. "But when I show my police ID, I am convincing them to allow me to search them."

And while Gul's husband approves of her work, some of her relatives aren't so tolerant. She doesn't care. "I love my job," she says defiantly, "and this is a holy job. I love my job as much as I love my children."

Still, she knows how much her children worry for her safety -- a reasonable fear in a country where female officers have, in the past, been targeted by the Taliban.

"The armed opposition is against the working of policewomen within the government," says Uriakhil, acknowledging the dangerous realities faced by Gul and her female colleagues. "This is why there is more risk for female police than male police."

Still, Gul perseveres -- for even if she didn't like her job, she couldn't afford to abandon this post.

"I have two sons and one daughter," says Gul, "and my husband is sick and jobless."

For Gul, it's a life full of personal and professional challenges -- combating terrorism and overcoming prejudice, one search at a time.