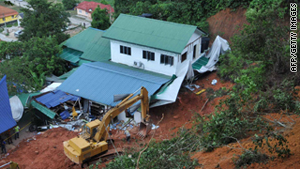 Emergency teams work at the site of a landslide that hit an orphanage in Hulu Langat, Selangor, on Saturday.

Rescue workers scoured the area for up to two dozen children believed buried in the landslides that hit the orphanage near Hulu Langat, southeast of the capital city of Kuala Lumpur, the Bernama news agency said.

It was not immediately clear how many of the 16 killed were children. Earlier reports said the bodies of at least five children, between the ages of 11 and 14, were pulled from the debris.

Eight children, between the ages of 11 and 17, and a 22-year-old adult were pulled out alive from the debris by rescue workers and villagers, Selangor Police Chief Datuk Tun Hisan Tun Hamzah said at a news conference late Saturday. But rescue workers were still searching for dozens missing, the police chief said.

The landslides, which were triggered by heavy rains Saturday, struck the orphanage at about 2:30 p.m., while many of its 49 male residents, including five adults, were outside setting up tents on the hillside for an outdoor event later in the day, the police chief said.

"We understand that two landslides occurred within seconds of each other. All of them in the camp were trapped," Tun Hisan said.

Prime Minister Datuk Seri Najib Tun Razak said he "instructed relevant authorities to investigate the cause of the mishap," the news agency said.

A nearby mosque was also struck by the landslides, though it was not immediately known whether there was anybody in the building at the time.

There were conflicting reports about the number of children in the area at the time of the landslides.

The prime minister's wife, Datin Seri Rosmah Mansor, told the news agency that about 70 children were believed to have been sent to orphanage to attend a "Teaching In English" program and "that some of them were victims."

The prime minister, who was attending meetings in the United States, said the government would rebuild the orphanage and provide payments to the victims.