Workers search for dozens of children buried in Malaysian landslide 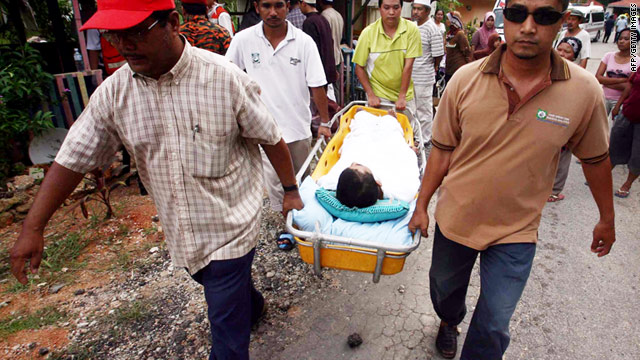 Emergency workers remove a child from an orphanage that was hit by a landslide in Hulu Langat, Selangor, on Saturday.
STORY HIGHLIGHTS
RELATED TOPICS

(CNN) -- Search and rescue workers were looking for as many as two dozen children still missing Sunday after landslides a day earlier buried an orphanage in Malaysia, the national news agency said.

Two landslides, triggered Saturday by heavy rains, struck within seconds of each other near Hulu Langat, southeast of the capital city of Kuala Lumpur, the Bernama news agency said.

Eight children, between the ages of 11 and 17, and a 22-year-old adult were pulled from the debris by rescue workers and villagers, who were still searching for dozens missing, the news agency said.

Many of the orphanage's 49 male residents, including five adults, were outside setting up tents on the hillside for an outdoor event later in the day when the landslides struck at about 2:30 p.m., the police chief said.

"We understand that two landslides occurred within seconds of each other. All of them in the camp were trapped," Tun Hisan said.

A nearby mosque was also struck by the landslides, though it was not immediately known whether there was anybody in the building at the time.