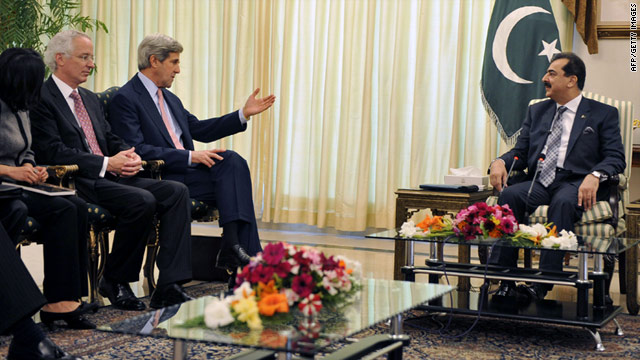 Yousuf Raza Gilani (R) listens to John Kerry (3L) during a meeting at the Prime Minister's house in Islamabad on Monday.
STORY HIGHLIGHTS

Islamabad, Pakistan (CNN) -- The United States need not apologize to Pakistan for the successful raid that killed terror mastermind Osama bin Laden, but it is important that the countries find a way to mend their frayed relationship in the wake of the attack, U.S. Sen. John Kerry said Monday during a visit to Islamabad.

Kerry said his goal in visiting was to begin a process that would leave the United States and Pakistan in a position where "isolated episodes, no matter how profound, do not jeopardize the relationships between our countries."

But he said Pakistan must choose between being a haven for extremists or a tolerant democracy and that the United States is willing to help the country.

"Our progress in the days ahead will be measured by actions, not words," he said.

Osama's wives and origins of polygamy

Although many in Pakistan have accused the United States of violating Pakistani sovereignty by launching a unilateral military attack inside the country, Kerry said Pakistanis should direct their ire at bin Laden and his legion of foreign fighters, who he said were responsible for thousands of deaths inside Pakistan.

The Pakistani parliament recently condemned the raid, adopting a resolution calling for a review of its counter-terrorism cooperation agreement with the United States. The resolution also ordered the immediate end of drone attacks in a tribal region of Pakistan near the Afghan border.

Failure to end unilateral U.S. raids and drone attacks will force Pakistan "to consider taking necessary steps, including withdrawal of (a) transit facility" that NATO uses to send troops and supplies into Afghanistan, the resolution said.

U.S. officials have questioned how the world's most wanted terrorist managed to live in plain sight for years in Pakistan -- near the country's elite military academy -- without being detected.

"We think that there had to be some sort of support network for bin Laden inside of Pakistan," President Barack Obama has said. "But we don't know who or what that support network was."

Pakistani and U.S. intelligence officials have said there is no evidence that any active members of Pakistan's military or intelligence establishment knew about or actively protected the al Qaeda leader, although some have publicly pondered such a link.

In remarks during his visit, Kerry said Pakistan's leaders have agreed to a "series of steps" to help mend the relationship between Pakistan and the United States.

Kerry said he was pleased Pakistan officials have committed to finding new ways to work on the terror threat and increased cooperation on joint operations and intelligence sharing, but did not elaborate on the steps to be taken.

He said two senior administration officials would soon visit the country to expand on the work. That visit would be followed by another featuring U.S. Secretary of State Hillary Clinton, Kerry said.

The United States has long expressed suspicion that the Pakistani intelligence service maintained contacts with militant groups that the United States blamed for attacking U.S. and international troops in neighboring Afghanistan.

Pakistan has protested suspected U.S. drone strikes that target militants in the tribal areas of Pakistan that border Afghanistan. The United States sees that region as a haven for extremists and militant groups. Pakistan has said that some drone strikes have killed and injured civilians.

The United States carried out at least five suspected drone strikes since last week. The latest was a strike on Monday that killed 10 suspected militants in Pakistan's tribal region, Pakistani intelligence officials told CNN. Two intelligence officials who asked not to be named because they were not authorized to speak to the media said the suspected drone fired two missiles on a militant's hideout in the area of Mir Ali of North Waziristan, one of the seven districts of Pakistan's volatile tribal region bordering Afghanistan.

The Monday strike was the 25th suspected U.S. drone strike this year, according to a CNN count. There were 111 such strikes in 2010, according to the count.

Some have long said that Pakistani politicians protest the suspected U.S. drone strikes in public but privately allow the United States to carry them out.

Kerry, the chairman of the Senate Foreign Relations Committee, has traveled to Pakistan on several occasions as a high-level emissary for the United States.

He most recently visited to help defuse tensions over the detention of Raymond Davis, a CIA contractor who was jailed in Pakistan after he shot and killed two Pakistani men in what he said was a robbery attempt. Davis was released from jail after compensation was paid to the victims' families.