Japanese nuclear plant to go off line after PM's warning 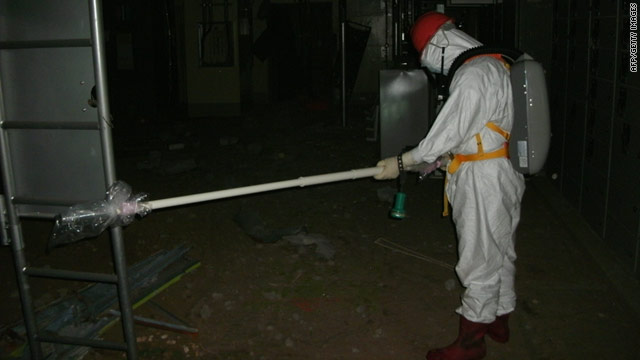 A worker measures radiation inside Unit 1 of Fukushima Daiichi Nuclear power station on May 5.
STORY HIGHLIGHTS

Tokyo (CNN) -- A Japanese nuclear plant will shut down its reactors after the country's prime minister warned it was vulnerable to natural disasters, its owner announced Monday.

The Chubu Electric Company said it will take two of its reactors at the Hamaoka nuclear plant off line and not bring a third back on line, effectively shutting down the plant.

In a statement, the company said, "At the May 9, 2011 meeting of the Board of Directors, Chubu Electric Power Company, Inc., has decided to suspend operations of Hamaoka Nuclear Power Plant until further measures to prevent tsunami (damage) are completed, as requested by the prime minister."

Prime Minister Naoto Kan said last week that the plant -- located on the Pacific coast in Omaezaki, southwest of Tokyo -- could produce "grave damage to Japan" similar to the problems at the Fukushima Daiichi nuclear power plant, and wanted earthquake and tsunami protections put in place.

Meanwhile, workers reentered the No. 1 reactor building at the crippled Fukushima Daiichi nuclear power plant Monday as they try to restore its cooling system, the plant's operator said.

On Thursday, workers went into the damaged facility for the first time since a magnitude-9.0 earthquake and ensuing tsunami in March. They installed a ventilation system that is filtering radioactive substances from the air.

The purpose of Monday's visit was to see how successful the system has been.

Once the radioactive contamination in the air is lowered enough, workers will be able stay in the building longer to install a cooling system that Tokyo Electric wants to use to perform a cold shut down of the reactor.

Cooling systems at Fukushima Daiichi, about 240 kilometers (150 miles) north of Tokyo, were knocked out by the devastating tsunami that struck Japan's Pacific coast after a massive earthquake March 11.

The disaster triggered the worst nuclear accident since Chernobyl as the cores of reactors 1-3 overheated and spewed huge amounts of radioactive contamination across the surrounding area.

The buildings that house reactors 1 and 3 were blown apart by hydrogen explosions in the first days of the crisis. Another hydrogen buildup is believed to have ruptured a water reservoir beneath the No. 2 reactor.

In April, Tokyo Electric laid out a six- to nine-month timetable for winding down the crisis and bringing the reactors to a complete shutdown.

The disaster has led to mandatory evacuations of about 78,000 people living within 20 kilometers (12.5 miles) of the plant. People living another 10 kilometers away -- or at least another 60,000 people -- have been ordered to remain sheltered.