Highlights: Key points in the raid that killed bin Laden 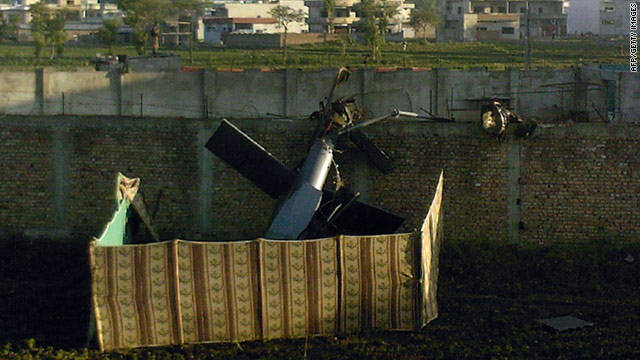 A crashed U.S. military helicopter is seen near the hideout of Osama bin Laden after the raid on his Abbottabad compound.
STORY HIGHLIGHTS
RELATED TOPICS

(CNN) -- Below is the most current account of the origins and execution of an early Monday morning raid that resulted in the killing of al Qaeda leader Osama bin Laden and four others. These details are from U.S. officials, unless otherwise noted.

-- Four years ago, U.S. officials uncover the identity of a trusted bin Laden courier -- later identified as a Kuwaiti named Abu Ahmad -- whom they believed may have been living with and protecting the al Qaeda leader. Two years later, investigators identify parts of Pakistan where the courier and his brother lived.

-- In late 2010, U.S. authorities hone in on a housing compound in Abbottabad, which is 30 to 35 miles north of Islamabad, Pakistan's capital.

-- The compound is placed under constant U.S. surveillance, and the CIA gets reports of repeated sightings on a tall man doing "prison yard walks" around the compound yard. They don't definitively identify this man as bin Laden beforehand, but President Barack Obama orders the go-ahead for the raid on April 29 after concluding there's enough evidence suggesting the al Qaeda leader is there.

-- The assault is code-named "Operation Neptune Spear," a U.S. official said Thursday. On Monday, a senior Obama administration official said that "Geronimo" was code for the act of capturing or killing bin Laden, not the man himself.

-- The CIA and U.S. military decide to move in overnight Sunday in part due to good weather, maximum darkness in the area and a worry that potential targets might move to other locations.

-- The raid locale is a compound with outer walls up to 18 feet tall topped with barbed wire, with two security gates and a series of internal walls that sectioned off different portions of the compound. The main structure is a three-story building with few windows facing the outside of the compound, and a third-floor terrace had a 7-foot privacy wall, they said.

-- Two families lived at the compound, along with that of bin Laden. One resided on the main house's first floor, while the other was in another building.

-- The entire mission is coordinated by Adm. William McRaven, the head of the Joint Special Operations Command, which oversees covert operations involving Navy SEALs. He does so from a base in Jalalabad, Afghanistan.

-- President Obama follows the mission in "real time" from the White House's Situation Room in what was then Sunday afternoon in Washington. He is joined by members of his national security and key members of his administration, including Secretary of State Hillary Clinton and Defense Secretary Robert Gates.

-- About two dozen U.S. special operations forces, specifically Navy SEALs, fly by helicopter into Abbottabad, Pakistan, early on the morning of Monday, May 2.

-- The team had orders to "capture or kill" bin Laden, the mastermind of the September 11, 2001, attacks on New York and Washington. CIA Director Leon Panetta told PBS the commandos had "full authority" to kill bin Laden if he did not surrender.

-- One helicopter makes a hard landing, when it apparently comes too close to a wall. It lands inside the western side of the compound, with its tail rotor over the southern wall, a U.S. official with knowledge of the Navy SEALs' debriefings on the raid said Thursday. Photos later show the helicopter clearly damaged, but in tact.

The SEALs in this helicopter get out safely, and go through an inner wall to get to the building where bin Laden was found.

-- A second helicopter lands outside near the compound's northern wall. The SEALs on that aircraft breach the outer wall to launch their attack.

-- The U.S. commandos encounter a man, later identified as Ahmad, in a guesthouse at the south end of the compound. He fires at the SEALs, who quickly kill him.

-- From this point on, no other forces fire at the U.S. Navy SEALs, according to the U.S. official on Thursday. This contrasts to earlier reports, also citing U.S. officials, which described the operation as a firefight throughout.

-- The SEALs move into the compound's main three-story building, along the complex's northern wall. They shoot and kill the courier's brother on the building's main floor.

-- The U.S. commandos climb up the stairs and encounter a man later determined to be one of bin Laden's sons. The son rushes at the SEALs and is killed.

-- Neither the courier's brother nor bin Laden's son has weapons on them or nearby, a U.S. official says Thursday -- again, running counter to earlier reports that the U.S. forces had been engaged in a firefight. But it is determined that the men still posed an imminent threat, according to the official.

-- The SEALs climb further upstairs to the third-floor room where bin Laden is with his Yemeni wife and several small children. He is shot first in the chest, then in the head above his left eye, while moving possibly toward weapons in the room.

-- Bin Laden himself never held a gun or used a woman as a shield, as U.S. officials once reported, but authorities thought he was enough of a threat to warrant shooting him.

-- One of the SEALs lay down beside the body, later identified as bin Laden, after the shooting to try to better gauge his height.

-- In addition to these four men, a still unidentified adult woman is killed in the raid.

-- Besides taking away bin Laden's body, the U.S. commandos also make off with extensive materials from the compound. That includes audio and video equipment, 10 hard drives, five computers and more than 100 storage devices, such as disks and thumb drives, a senior U.S. official tells CNN. Commandos also recover five cell phones, paper documents and five guns, including AK-47s and pistols. The bodies of all others killed were left behind.

-- A senior Pakistani intelligence official, speaking on condition of anonymity, says bin Laden's wounded wife Amal al-Sadah is now in Pakistani custody. An earlier since-refuted report had wrongly suggested that this wife was killed. A U.S. official says she was shot in the leg when she rushed at the commandos.

-- The entire operation -- from the time the SEALs land at the compound to when they take off -- takes 38 minutes.

-- Pakistan scrambles fighter jets in response to the attack, White House counterterrorism adviser John Brennan said Monday. But they do not arrive until after U.S. forces had flown away from Pakistan.

-- Bin Laden's remains are flown to the aircraft carrier USS Carl Vinson, then in the North Arabian Sea. After DNA tests and further confirmations of his identity, he is buried at sea within 12 hours of his killing "in conformance with Islamic precepts and practices," White House press secretary Jay Carney says Tuesday.