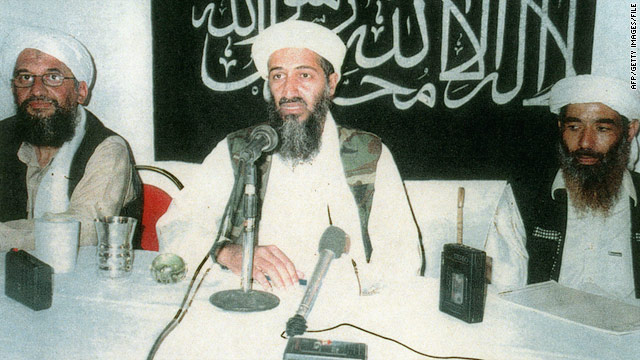 With bin Laden gone, the question now becomes "What happens to al Qaeda?"

Within hours of bin Laden's death, questions began to emerge about who would take the helm of the organization and whether it would create an opportunity for other Islamic organizations to step up.

"Al Qaeda is weakened. But it doesn't mean that the United States has no challenges," Steven L. Spiegel, director for Middle East development at the University of California Los Angeles, said Monday.

Opinion: A deathblow to al Qaeda?

Standing behind bin Laden for more than two decades has been an ideological army that stretches around the world, where militants have set up their own "al Qaeda franchises," analysts said.

"He was very good at coming up with messages that would unify al Qaeda," said Paul Cruickshank, a CNN analyst for terrorism and an alumni fellow at the New York University's Center on Law and Security.

"Now without bin Laden, they will likely lose some of that unity."

That loss could make room for groups such as the Muslim Brotherhood, the largest political opposition party in many Arab states, and Hamas, considered a terrorist organization by the United States, to gain traction, Spiegel said.

"I think that there will be reprisals, not necessarily from al Qaeda itself, although they'll try, but also in Pakistan," said Peter Bergen, CNN's national security analyst.

"I think that we'll see protests in the streets of Pakistan and some violence ... against American and also Western targets."

Bergen, who met bin Laden in 1997, said he believes al Qaeda will be irrecoverably damaged by the death of its founder.

"There's no one who can replace him. When you join al Qaeda you pledge a personal oath of allegiance (to him)," he said.

Bin Laden's top deputy, Ayman al-Zawahiri, was widely expected to take over control of the network.

U.S. counterterrorism officials have described Al-Zawahiri as al Qaeda's chief organizer and bin Laden's closest confidante. Like bin Laden, he has long believed to have been hiding in the Afghanistan-Pakistan border.

But there could be other challengers, analysts said.

"Who leads next kind of depends on which parts of the Middle East or the Islamic world really get hot," said Flagg Miller, a professor of religious studies at University of California Davis.

Miller is writing a book, "Becoming Bin Laden," which investigates the contents of bin Laden's audiotape library, a collection that CNN acquired from his residence in Kandahar, Afghanistan.

Top on the list is al Qaeda's leader in Yemen, cleric Anwar al-Awlaki, who has been linked to the Fort Hood, Texas, shooter, Maj. Nidal Hassan, and the 2009 Christmas Day bombing attempt by Umar Farouk AbdulMutallab, the alleged "Underwear Bomber."

Bin Laden's legend among al Qaeda militants dated back to the 1980s when he left his native Saudi Arabia to fight the Soviet Union after it invaded Afghanistan, a country where he would later found al Qaeda, Arabic for "the base."

"They were inspired and they were led by this very amorphous leader," Spiegel said.

"You take him out, you take out the inspiration."

Bin Laden's al Qaeda had a fairly inauspicious start, working to provide documentation for Arabs who fought against the Soviets. Among its services was providing death certificates.

But it was in the 1990s, when the United States sent troops to Saudi Arabia -- home to the most holy site to Muslims, Mecca -- that al Qaeda morphed into a terror network.

Bin Laden used his personal fortune to finance a fatwa, a religious order, against the United States.

After the 9/11 attacks, al Qaeda's terror network grew with subsidiaries popping up in a number of Middle East and African countries as well as in Europe.

"They are a very patient organization. They have survived two decades without a state sponsor. There is no need for them to rush," said counterterrorism expert Erroll G. Southers, an adjunct professor at the University of Southern California.