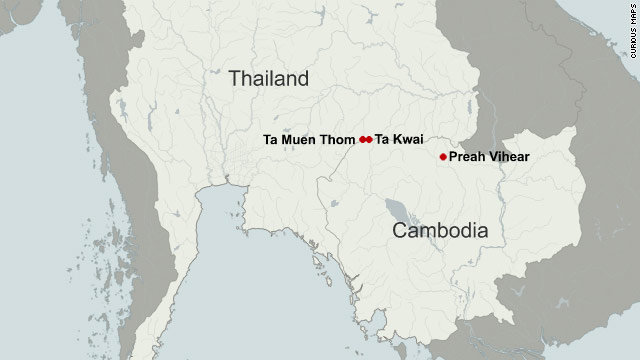 A border dispute that turned violent over the last week remains volatile, and the hiatus was forged at the unit commander level but not the higher levels of the militaries.

The source, who asked not to be named because he is not authorized to speak, said if the peace persists, higher-ranking people may meet on Friday.

Cambodia's government spokesman could not be reached for comment.

Indonesia has offered to provide observers in the border area and help both sides resolve the crisis diplomatically.

Natalegawa also said Thailand welcomes the deployment of an Indonesian observer team to the disputed area.

This idea was first agreed upon, in an emergency meeting of ASEAN's Foreign Ministers in February, also in Jakarta. The observers have not been deployed, after Thailand later stated their presence was not needed.

"I just want to reassure that Thailand will work very earnestly and in a very serious manner with Indonesia in the role of Indonesia as a great facilitator," said Piromya.

However, he maintained Thailand's position was on the defensive in recently renewed clashes with Cambodia.

"I just want to use this opportunity to once again reaffirm that the military action by the Thai side was only on the defensive side. We have not made any aggression. It was only (an) appropriate response to the conflict that was started by the Cambodian side," he said.

Natalegawa said he and Piromya were able to discuss terms of reference for the Indonesian observer team.

"I think it's quite fair to say that we have made a very good progress, and I could say that we are truly in the brink of confirming the agreement by all sides. Based on my conversation just now, I shall be circulating to both Thailand and Cambodia what I hope to be the final version of the Term of Reference for its immediate early adoption by the parties concerned."

U.N. Secretary-General Ban Ki-moon is urging both nations to pursue "an effective and verifiable cease-fire."

Clashes between the two started Friday as they accused each other of trying to seize ancient temples.

Thailand calls the temples Ta Kwai and Ta Muen, while Cambodia calls them Ta Krabey and Ta Moan. Much of the border between the two countries remains in dispute.

Both sides claim the disputed temples are in their country.

Fighting flared up in February along another disputed border area between the two nations, prompting the U.N. Security Council to issue a statement calling on both sides to implement a cease-fire.

Those clashes stemmed from a longstanding conflict related to the 11th-century Preah Vihear temple.

Both Cambodia and Thailand lay claim to the temple, which sits atop a cliff on Cambodian soil but has its most accessible entrance on the Thai side.