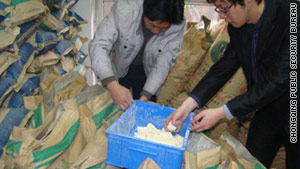 The seized milk had been intended for use in ice cream, officials said.

The Public Safety Bureau in the city of Chongqing said the factory that bought the milk had closed for equipment maintenance. And therefore, none of the contaminated milk powder made it into the market.

Police have detained three people in connection with the case.

Some Chinese dairy plants add the chemical to milk products so they appear to have a higher protein level.

A scandal erupted in 2008 when tainted milk killed at least six babies, and caused kidney stones and urinary tract problems in hundreds of thousands of children.

In all, 21 people were tried and sentenced for their roles in the scandal. Two were executed.

The company at the center of it filed for bankruptcy.

The Chongqing seizure took place on March 25. City officials announced it on Tuesday, as they kicked off a 100-day food safety campaign.