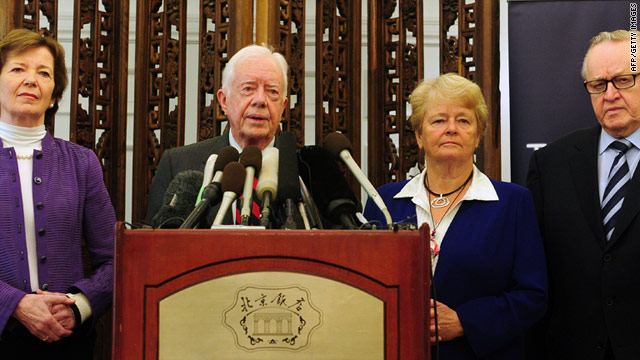 Beijing (CNN) -- Former U.S. President Jimmy Carter, as part a group of independent global leaders founded by Nelson Mandela, will travel to North Korea on Tuesday in hopes of restarting talks between the North and South.

"At a time when official dialogue with the Democratic People's Republic of Korea appears to be at a standstill, we aim to see how we may be of assistance in reducing tensions and help the parties address key issues including denuclearization," Carter said Monday from Beijing, where he was meeting with Chinese Foreign Minister Yang Jiechi and a Chinese expert on North Korea's nuclear situation.

Carter and the group known as "The Elders" are expected to meet with ailing North Korean leader Kim Jong Il, along with other senior officials and diplomats. They are going to Pyongyang at the invitation of the North Korean government, Carter said

In addition to Carter, The Elders going to North Korea consist of former Presidents Martti Ahtisaari of Finland and Mary Robinson of Ireland, and former Norwegian Prime Minister Gro Brundtland.

"Clearly there is a great level of mistrust and suspicion between North and South Korea," Ahtisaari said. "But the stakes are too high to allow this standoff to continue."

The North's critically low food supply is also expected to be a part of the discussions.

"We are very concerned about the acute shortages of food reported by the government of North Korea and humanitarian agencies," said Brundtland, who is also a former director-general of the U.N. World Health Organization. "We also want to discuss longer-term food security and health issues that are so important to economic development."

The Elders are scheduled to spend three days in Pyongyang, before flying to Seoul on Thursday, where they will meet with South Korean officials.

Tensions between North Korea and the West have spiked in recent years due in part to concerns about Pyongyang's nuclear development program.

The United States and South Korea held joint military drills in February, despite North Korea's warning to the South not to carry out the drills, calling them a provocation.

Carter has a long history of dealing with North Korea. His 1994 talks with the late Kim Il Sung, Kim Jong Il's father, paved the way for the Agreed Framework the same year -- an agreement designed to rein in Pyongyang's nuclear ambitions.

In August, Carter helped secure the release of Aijalon Mahli Gomes, a U.S. citizen who had been fined roughly $600,000 and sentenced to eight years of hard labor for crossing over the Chinese border into North Korea.

Gomes, who attempted to commit suicide while in North Korean custody, was believed to be a Christian activist.

Earlier this month, North Korea reported through state-run news agency KCNA that it had arrested U.S. citizen Jun Young Su last year for "committing a crime" against the reclusive nation.

KCNA did not provide details of the nature of the alleged crime.

Two State Department officials, speaking on condition of not being identified, previously told CNN that the man is a Korean-American businessman. One of the sources said the businessman had a visa to enter North Korea.

It was not known how Carter's visit might affect his detention.

Two American journalists -- Laura Ling and Euna Lee, who had entered North Korea in March 2009 and were arrested and sentenced to 12 years of hard labor -- were released in August 2009 after an intervention by former U.S. President Bill Clinton.