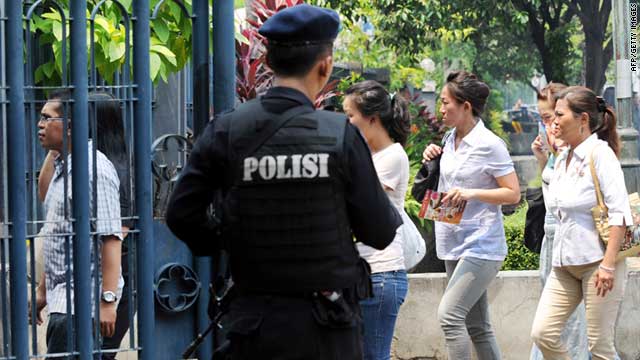 An Indonesian policeman is on guard as people walk toward a Catholic church for a mass prayer on Good Friday in Jakarta.
STORY HIGHLIGHTS
RELATED TOPICS

Jakarta, Indonesia (CNN) -- Indonesia is on high alert after police foiled terror plans to detonate bombs Friday near a church in a Jakarta suburb.

The plan was to detonate the bombs by a timer, using a mobile phone, just before a scheduled Easter service at a Catholic church in Tangerang, authorities said.

Police uncovered the plan after the arrests of 19 suspects over the past few days.

The suspects were allegedly involved in the foiled attack near the Catholic church.

Authorities found about 150 kilograms (330 pounds) of explosives near the church on Thursday, said Boy Rafli Amar, the national police spokesman.

There were two large bombs and five smaller ones, he said.

"Starting tonight until the day after Easter, the military and the police will be on the highest alert at all places," said Joko Suyanto, the coordinating minster for security.

Indonesia is a predominantly Muslim nation, but has other religious minorities such as Christians and Hindus. The government has been vigilant over the threat of sectarian violence.

Security will be beefed up around houses of worship, tourist destinations, embassies and sites visited by foreigners, officials said.

Police arrested the suspects in connection with the church bomb and/or attempted mail bomb attacks last month. The mail bombs were packed as fake books and sent to four targets, including a moderate Muslim scholar and a human rights activist, officials said.

Two security officials and a police detective were injured while attempting to defuse one of the mail bombs, the police spokesman said.

Indonesia has been on edge after last month's parcel bombs and the Friday suicide bombing in a mosque in Cirebon, West Java.