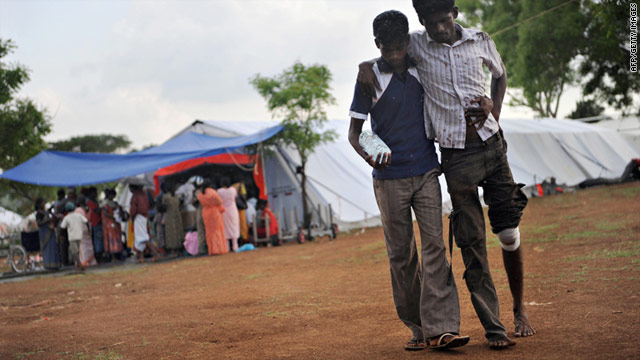 Thousands of civilians were caught up in the final stages of Sri Lanka's decades-long bloody civil war in 2009.
STORY HIGHLIGHTS
RELATED TOPICS

(CNN) -- A United Nations panel investigating alleged war crimes in the Sri Lankan conflict has found credible evidence that the military shelled civilians in no-fire zones and sought to silence critics in brutal fashion, according to the panel's report, leaked to a Sri Lankan newspaper.

The report contradicts claims by the Sri Lankan government that it adopted a policy of "zero civilian casualties" in the final stages of its bloody 25-year battle with the Tamil rebels.

"The government shelled on a large scale in three consecutive no-fire zones, where it had encouraged the civilian population to concentrate, even after indicating that it would cease the use of heavy weapons," according to the report, published last week on the website of the newspaper, The Island.

"It shelled the United Nations hub, food distribution lines and near the International Committee of the Red Cross ships that were coming to pick up the wounded and their relatives from the beaches. It shelled in spite of its knowledge of the impact. ... Most civilian casualties in the final phases of the war were caused by government shelling."

The Sri Lankan government denounced the report as "fundamentally flawed."

A statement from the Ministry of External Affairs said that "among other deficiencies, the report is based on patently biased material, which is presented without any verification."

President Mahinda Rajapaksa has said he will turn a planned May Day rally into a protest against the United Nations.

U.N. officials would not comment on the leaked report, but spokesman Farhan Haq said the published portions are accurate.

"They are incomplete, they're certainly not the full report, but they are accurate renditions of things that appear in the text," he said.

U.N. Secretary-General Ban Ki-moon appointed the three-member panel last year to advise him on accountability issues relating to alleged human rights violations during the final stages of the Sri Lankan war, which ended in May 2009.

The panel found both sides accountable for serious war crimes.

The report says the Liberation Tigers of Tamil Eelam, who fought fiercely to secure an independent state for minority Tamils, "refused civilians permission to leave, using them as hostages, at times even using their presence as a strategic human buffer between themselves and the advancing Sri Lanka army.

"All of this was done in a quest to pursue a war that was clearly lost; many civilians were sacrificed on the altar of the LTTE cause and its efforts to preserve its senior leadership," the report says.

The government, the report says, "systematically shelled hospitals on the frontlines."

It also "systematically deprived people in the conflict zone of humanitarian aid, in the form of food and medical supplies, particularly surgical supplies, adding to their suffering. To this end, it purposely underestimated the number of civilians who remained in the conflict zone. Tens of thousands lost their lives from January to May 2009, many of whom died anonymously in the carnage of the final few days."

The report also is critical of government soldiers' screening of civilians in their hunt for rebels. Sometimes, it says, those who were singled out as suspects were summarily executed.

"If proven, those most responsible, including Sri Lanka Army commanders and senior government officials, as well as military and civilian LTTE leaders, would bear criminal liability for international crimes," the report says.

Sri Lanka's long and bloody conflict devastated nearly two-thirds of the population in its northern and eastern provinces. As many as 70,000 people were killed.