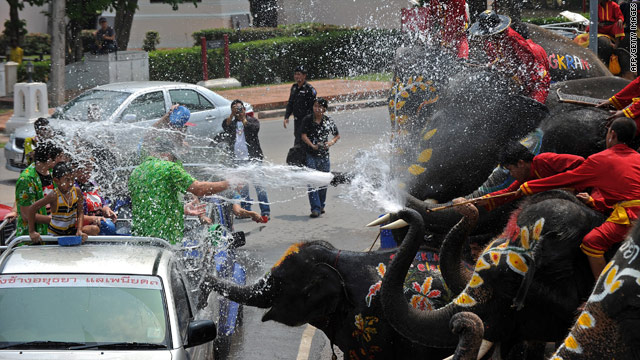 Songkran marks the beginning of the lunar year in Thailand. The ancient religious festival is an opportunity for Thais to relax with family, pay respect to monks and elders, and receive blessings of prosperity for the new year.

There are also good-natured water fights between people -- and apparently elephants, too!

Most of you were all over it in the comments, but first credit has to go to commenters "krippletoe," "cbozey" and "Ganolen."

"Nirquidian" later added that "the water is meant as a symbol of washing all of the bad away and is sometimes filled with fragrant herbs when celebrated in the traditional manner." Cool.

"Thaiguy333" was right on the money with the province of Ayutthaya, but with a name like Thaiguy333 we'd expect nothing less.

Well done, folks. We'll have to try harder to stump you next Monday.