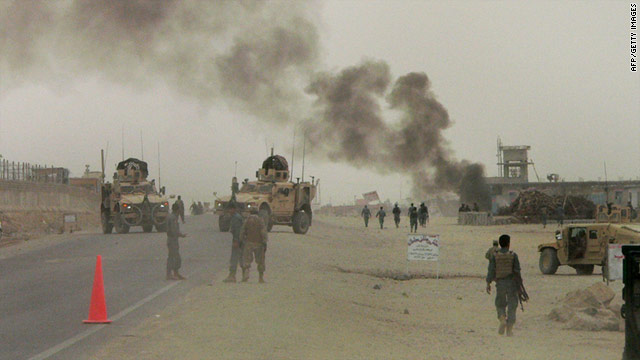 Kabul, Afghanistan (CNN) -- At least three people were killed in one of three attacks in Afghanistan Thursday morning, officials said.

Four suicide bombers attacked the police station and one was able to get inside and detonate his explosives, Gull said. Three police officers were killed in the attack and two were injured, Gull said.

A Taliban spokesman said his organization was responsible of the attack.

"(We) have killed many local policemen during the attack on a local police center," said Zabiullah Mojahed, the spokesman.

Police were able to shoot and kill one of the attackers before he could detonate his bomb and the other two attackers were unaccounted for, Gull said.

Two women were injured when a suicide bomber detonated his explosives in an area of Kandahar Thursday, police said.

Also three police officers and a civilian were wounded after a truck exploded near a district governor's office in southeast Kabul.