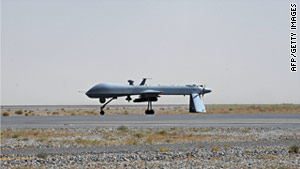 U.S. military drones, like the one above, are often used in Afghanistan by NATO forces.
STORY HIGHLIGHTS

Washington (CNN) -- The deaths of two U.S. service members in southern Afghanistan last week is being investigated as a possible friendly-fire incident, a spokesman for the NATO-led International Security Assistance Force told CNN.

The U.S. military has informed relatives it is possible the men were inadvertently killed Wednesday by a missile fired from a U.S. military drone outside Sangin in Afghanistan's Helmand Province, according to spokesman Capt. Ryan Donald.

Donald strongly emphasized Monday the circumstances of the incident remain under investigation and no formal findings have been reached.