Words of hope for Japan

By Kathleen Koch, special to CNN 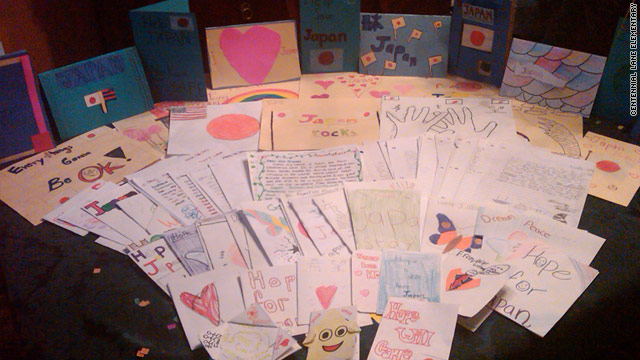 Editor's Note: Kathleen Koch launched "Words of Hope for Japan," an effort to send an encouraging word to each man, woman and child affected by the March 11 earthquake and tsunami.

(CNN) -- The scenes on the news after an earthquake and subsequent tsunami struck Japan's coastline were sadly familiar.

Survivors wandered lost through mud-covered remains of their towns. Landmarks and street signs were gone. A resident peered at a photo plucked from the debris, trying to recognize a face in hopes of reuniting it with its owner.

My friends and I on the Gulf Coast saw similar scenes after Hurricane Katrina, particularly in Mississippi where the storm spared little.

But soon after we saw volunteers pour in to help. Letters arrived, too. Mississippi teenager Sabrina Bradford received one from a boy in Guam.

"It meant more than almost anything else we received 'cause it was a special kind of comfort," she said. "The letters let us know that we weren't forgotten."

I watched as hundreds of thousands in Japan were left homeless and facing uncertainty, and I realized we could help. So I launched "Words of Hope for Japan," an effort to collect a caring letter of support for every man, woman and child in a shelter in Japan. Our goal is to collect 300,000 letters.

Initially word spread slowly. The Sun Herald, a Mississippi Gulf Coast newspaper, passed on my call for residents to pay it forward, since so many had helped and encouraged them after the hurricane. Within four days, letters from Mississippi began filling the post office box.

"I know at this time you feel empty and confused," shared a woman from Kiln. "However, in time things will get better. Trust me. I know things will never be back to normal again, but you'll have to set a 'new' normal."

A grandmother from Ocean Springs wrote: "We learned so much from it, however. You can live with a small amount of food each day; water is very precious; family and friends are the most important; and God loves us."

One Gulf Coast resident encouraged that "everyday heroes" will arrive.

"Some will be the police, firemen and military who arrive, but some will be regular folks who rise to the need," the resident wrote.

Schools have jumped into the project with enthusiasm. So many children are glad to have a way to help. Just a week into our effort, I went to pick up letters written by students at Centennial Lane Elementary School in Ellicott City, Maryland.

Words of hope for Japan
Write your own letter of hope and send it to:

Hearts, peace signs and other cheerful images decorated the cards. Many bore the Japanese flag accompanied by encouraging slogans. "Don't Worry Japan!" "We Hope You're Safe." " Everything's Gonna Be OK!"

"It's important for the children to understand that people all over the world have problems and need help. And that this could happen to any of us," said Julie Goetzinger, a fifth-grade teacher.

Letters are being translated by volunteers in Japan and the United States.