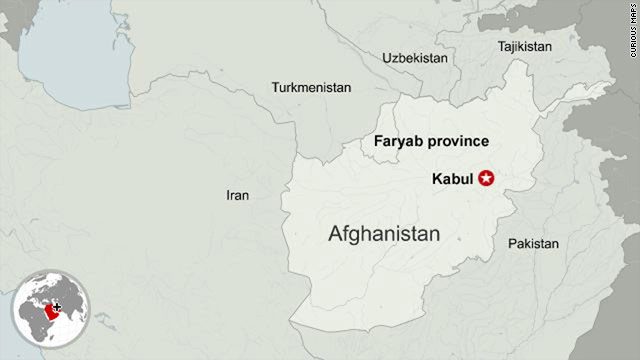 Check out CNN.com's Afghanistan Crossroads blog for the latest developments.

The victims were teaching a group of border policemen in a meeting room in Faryab in northern Afghanistan, according to the deputy governor of Faryab province, Abdul Sattar Bariz.

The gunman escaped on foot, running toward the desert, Bariz said.

"Initial reports say that there were about six Americans inside the meeting room and only two of them have been killed," he said, adding that he did not have many other details.

The NATO-led force did not identify the nationality of the dead.

The United States did not immediately confirm that the victims were American. The Pentagon usually does not name casualties until 24 hours after next of kin have been told of their deaths.

Afghan troops and the International Security Assistance Force were investigating the shooting, the force said.

In November, a gunman in an Afghan Border Police uniform shot and killed six U.S. troops during a training mission in eastern Afghanistan, the force said.

The suspect was killed in that incident, the force said.

At the time, NATO's supreme commander described the shooting as a "tragedy" but noted that significant progress had been made in building up Afghanistan's police forces.

The NATO-led force consists of more than 130,000 troops from 48 nations fighting in Afghanistan, according to the latest tally posted last month on the force's website.