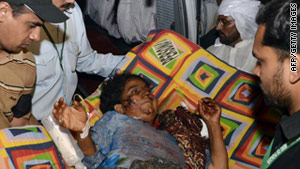 Volunteers carry a blast victim to a hospital in Multan, Pakistan, on Sunday.

(CNN) -- A suicide bombing at a Sufi shrine in central Pakistan's Punjab province on Sunday killed at least 41 people and wounded more than 100 others, police said.

Ahmed Mubarak, the police chief of the Dera Ghazi Khan district, said 10 of the injured are in critical condition.

The bomber blew himself up when he was stopped at the entrance of the Sakhi Sarkar shrine, Mubarak said.

A second would-be suicide bomber wearing an explosives-laden jacket was arrested at the shrine, Mubarak said.

The shrine is in the outskirts of the district capital, more than 400 kilometers (249 miles) south of Peshawar.

Dera Ghazi Khan is no stranger to violent bombings. Dozens of people were killed in a December 2009 bombing that ripped through a market near the home of a provincial official.

Another blast earlier that year struck a crowd of Shia Muslims as they took part in a procession toward a mosque, killing scores of people.