Reports: Radiation may prevent recovery of some bodies in Japan 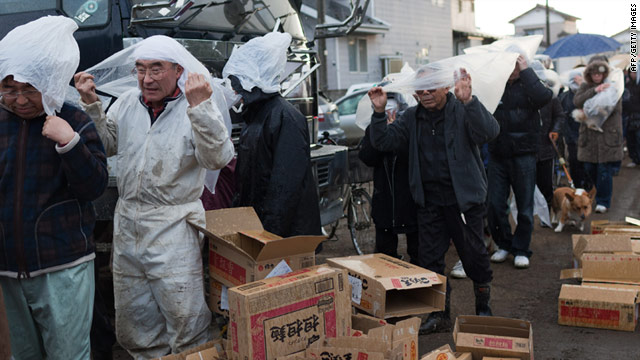 Thousands of Japanese people are still awaiting news of the whereabouts of relatives following the earthquake.
STORY HIGHLIGHTS

Tokyo (CNN) -- Thousands of Japanese, still awaiting answers on the fate of their loved ones nearly three weeks after an immense earthquake and subsequent tsunami, were dealt another blow Thursday.

Media reports suggest their relatives' bodies, located near the crippled Fukushima Daiichi plant, may not be recovered because of radiation fears.

Authorities may not be able to reach some bodies -- victims of the 9.0-magnitude quake and resulting tsunami March 11 -- inside the 20-kilometer evacuation zone surrounding the crippled plant, because of high levels of radiation, Japanese news outlets reported.

No one knows exactly how many bodies are unrecovered inside the evacuation zone. Fukushima Prefecture police told CNN on Thursday that police were unable to recover one body, that of a man, in the town of Okuma after high levels of radiation were detected. Because officials were unable to bring the body back, they moved it from its outside location to under a roof, police said.

What if we did not have nuclear power?

The reports, however, raise a grim possibility for loved ones: that their relatives' bodies may by lying inside the evacuation zone and may not be recovered -- a painful situation for Japanese, who typically stage elaborate Buddhist funerals and cremate their dead.

In Fukushima Prefecture, 4,760 people remain missing. Their names, addresses and photos are listed on websites by relatives desperate for answers.

But, police noted, authorities have already gone through the area to search for the missing. They are unaware of any bodies on the streets. Police conceded some could be indoors, but said they do not believe that number is high.

Bodies can absorb radiation much like any other object, said Dr. Wally Curran, head of Emory University's Winship Cancer Center and a radiation oncologist. Proper handling of the bodies would depend on their levels of radioactivity, he said, and would have to be assessed by those on the ground.

"It's a real tragedy," he said. "I'm sure the recovery workers will be assessing the radioactivity in any of the remains of people, animals and buildings as they go along. Hopefully, if they do find a large number of bodies, they can still be dealt with respectfully."