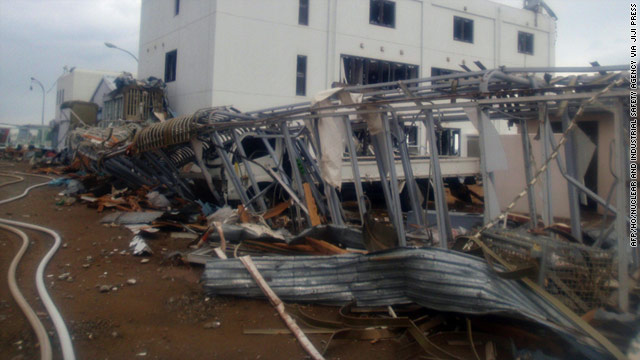 Part of the Fukushima power station photographed on March 23 -- radiation still appears to be leaking from the damaged plant.
STORY HIGHLIGHTS

(CNN) -- Despite the heroic efforts of technicians and engineers battling to prevent a full nuclear meltdown at the quake-damaged Fukushima Daiichi plant, radioactive material is still seeping into the surroundings of the power station.

Plutonium has been detected in soil samples near the plant, the Tokyo Electric Power Company (Tepco) said Monday.

And highly radioactive water has been found for the first time outside one of the reactor buildings on Monday, albeit in a tunnel. Radioactive iodine and cesium have also been detected in sea water near the plant, Japan's nuclear and industrial safety agency said last week.

These latest reports of radioactive leaks -- and the possibility that there may have been a partial meltdown in three reactors -- raise questions about the immediate dangers poised to human health and the environment.

Could Japan nuke disaster occur in US?

How did radioactive water leak out of reactor No. 2?

It is still not entirely clear how radioactive water made its way into a maintenance tunnel leading to reactor No. 2's turbine building.

However, Japanese Chief Cabinet Secretary Yukio Edano says he has received a report that the No. 2 unit's containment vessel "is damaged and water is leaking."

Professor Robin Grimes, Director of the Center for Nuclear Engineering at Imperial College London, says it is possible that some contaminated water could also have leaked from the "external steam suppression unit," which may have been damaged during a hydrogen explosion in the building surrounding the reactor on March 14.

"This is a guess, it has to be emphasized, " says Grimes, "There is a complex cacophony of different sources that could have contributed to the leaking water."

What about the contaminated seawater?

The amount of radioactive iodine-131 isotope in the samples, taken Wednesday some 330 meters (361 yards) into the Pacific Ocean, has surged to 4,385 times above the regulatory limit, the nation's nuclear safety agency said Thursday.

This tops the previous day's reading of 3,355 times above the standard -- and an exponential spike over the 104-times increase measured just last Friday.

Journalist Martin Savidge, who is reporting on the incident for CNN from Tokyo, says one theory is that the tunnel may have contributed: "The fact that water has been detected in the tunnels could explain how it (contaminated water) has got into the ocean."

Japanese authorities do not know where the highly radioactive water is coming from or how it reached the sea.

However, Japan's nuclear safety agency says there's no evidence yet of overflow. It said workers are using sandbags and concrete panels to keep the water inside the tunnel, which is located about 55 meters (180 feet) from the shore. The radioactive iodine and cesium could have also been in the atmosphere and then been washed down by precipitation.

And the radioactive soil?

Plutonium was detected in soil on the grounds of the nuclear power plant. The element was found in soil samples taken March 21-22 from five locations around the plant, says Tepco.

The No. 3 reactor has been of particular concern because it is the only one to use mixed-oxide fuel that contains a small percentage of plutonium, which is also a byproduct in other reactors.

Chief Cabinet Secretary Yukio Edano told reporters Tuesday that it was "likely" at least some of the plutonium came from the plant.

Grimes said it is not clear where the plutonium in the soil had come from, also adding that it is possible that it was from the Fukushima plant.

"These are incredibly small amounts at the moment but we need to keep watching," says Grimes.

In the context of nuclear energy it is ionizing radiation that is referred to, which passes through matter causing it to become electrically charged or ionized. In living tissues, the electrical ions produced by radiation can affect normal biological processes.

Are these leaks dangerous?

"The sea is a phenomenally large dilution vehicle so when you get radioactive material in the ocean most of it just gets diluted. Some of the radioactive particles could collect in material near the reactor and this will have to be monitored and cleaned," says Grimes.

"If it got into local sea life, such as shell fish which tend to concentrate this type of material, then there will be repercussions and there might have to be restrictions on the consumption of local fish."

Fishing is not allowed within 20 kilometers (12 miles) of the plant, and he claimed that waterborne radiation should dilute over time.

According to the plant's owners, the plutonium in the soil poses no human health risk.

What are the effects on humans?

Malcolm Grimston, Associate Fellow for Energy, Environment and Development at London's Chatham House, said the single biggest issue following the Chernobyl disaster was radioactive iodine getting into the thyroid gland and causing cancer.

What is happening to the water being used to cool the reactors?

Water has been a key weapon in the battle to stave off a meltdown at the facility but officials say there is a flip side to pumping and spraying tons of water to keep radioactive fuel from overheating: the water has to go somewhere.

"Now the focus is how to... remove the water and contain it safely," Edano told reporters Tuesday.

Savidge says: "They have to keep the water flowing to keep the reactors cool, but some of it has been leaking into access tunnels, the basement... and the containment sites, where the water is stored, are all full. They are simply trying to stop the water from going into the sea using sandbags to block drainage pipes."

What is a partial meltdown?

Japanese officials and international experts have said they believe there has been a partial meltdown at three of the six reactors at Fukushima.

Will the plant be nationalised?

Talks are continuing about the government becoming a majority shareholder, says Savidge. The government is worried about the ability of the plant owners to fulfil any future compensation claims. The government thinks that the owners could struggle with such claims, adds Savidge.

How did the crisis at the plant begin?

Three reactors were in operation when the 9.0 magnitude quake struck on March 11. The reactors -- which went into service between 1970 and 1979 -- are designed to shut down automatically when a quake strikes, and emergency diesel generators began the task of pumping water around the reactors to cool them down. However, these stopped about an hour later. The failure of the back-up generators has been blamed on tsunami flooding by the International Atomic Energy Agency (IAEA).