India, Pakistan in talks ahead of 'cricket diplomacy' summit 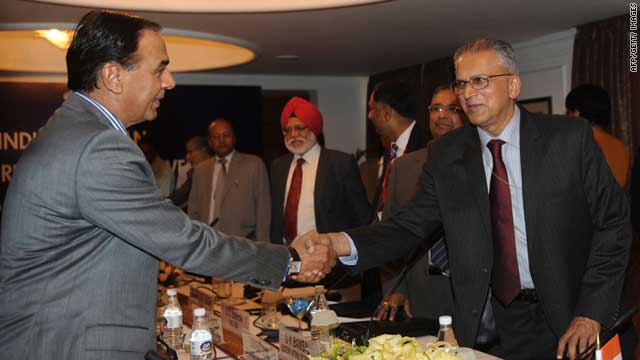 New Delhi, India (CNN) -- Home secretaries of India and Pakistan were meeting in New Delhi Monday as prime ministers of the two countries prepared to watch a World Cup cricket match between the South Asian rivals together this week as part of efforts to rebuild ties broken off by the 2008 Mumbai attacks.

They were expected to discuss counterterrorism, the drug trade and forged currency among other issues, he added.

Monday's meeting comes two days ahead of the World Cup cricket semi-final that Indian and Pakistani prime ministers are scheduled to attend. The India-Pakistan match will be held at Mohali, around 250 kilometers northwest of New Delhi.

Last week, Indian Prime Minister Manmohan Singh invited Pakistan's prime minister, Syed Yusuf Raza Gilani, to Wednesday's match. The nuclear-capable neighbors, which have fought three wars since the blood-soaked partition of the Asian subcontinent in 1947, have in the past used cricket as a platform to ease relations.

Earlier this year, both nations agreed to resume peace talks frozen by the Mumbai terror attacks. In February, Indian Foreign Secretary Nirupama Rao said the talks will focus on a range of issues, such as terrorism and humanitarian, economic and water-related matters.

"There are no overnight solutions and we need time, we need patience, to resolve many of these issues. So we're not raising high expectations," she told CNN on February 10. "We're not setting overambitious objectives. But this is a re-engagement, and we have to hope for the best."

Under U.S. pressure, Indian and Pakistani leaders held several meetings last year in a bid to put their fragile peace process back on track, but no dramatic headway had been made until recently in resolving outstanding issues.

In 2004, they agreed to negotiations that cover eight issues, including Kashmir, terrorism and Pakistan's concerns over river dams on the Indian side, which it sees as a threat to its water supplies. Successive governments on both sides have held talks in an attempt to end their historical acrimony.

Singh and Pakistan's President Asif Ali Zardari hailed results from the dialogue in September 2008 as the countries completed four rounds of diplomatic meetings. But talks were suspended two months later, in November 2008, after the terror raid on Mumbai that left more than 160 people dead.