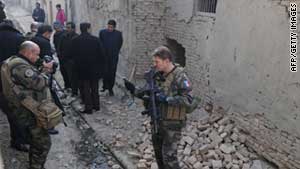 Soldiers with the NATO-led ISAF and Afghan policemen investigate at the site of an explosion in Kabul in January.
STORY HIGHLIGHTS
RELATED TOPICS

Kabul, Afghanistan (CNN) -- A suicide bombing targeting contractors working in eastern Afghanistan killed at least 13 people and wounded 50 others, according to conflicting accounts by NATO and government officials Monday.

The Afghan Interior Ministry described an attack that killed 20 construction workers and wounded 56 others.

The governor's office in Paktika Province had a third account of a suicide attack.

"Twenty-four people were killed and 59 people were injured while a car bomb full of explosive devices entered in to Zahir Construction Company and detonated the explosive at 8:30 p.m. last night," the governor's office said in a statement.

It was not immediately clear if NATO's International Security Assistance Force and Afghan officials were talking about the same incident.

In ISAF's account, an attacker drove a car bomb into a madrasa, a religious school, in the Bermal district of Paktika Province at 12:30 a.m Monday.

Afghan contractors working for ISAF at a nearby base were staying at the school at the time of the attack, according to the force.

The ministry said it condemns the suicide attack in the "strongest terms."

Authorities have launched an investigation, the ministry said.