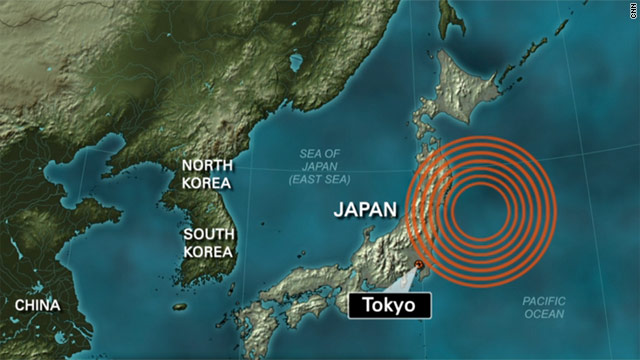 (CNN) -- A tsunami advisory issued in northeast Japan on Monday shook the survivors of a massive earthquake and tidal wave that left thousands dead earlier this month.

The advisory issued after a 6.5-magnitude earthquake struck at 7:24 a.m. local time was called off less than two hours later.

It jolted a nation already grappling with the effects of a 9.0-magnitude earthquake that struck March 11, unleashing a wall of water that swallowed everything on its path.

"These are people who are still standing in the rubble of their homes," CNN's Kyung Lah reported Monday. "People are still looking for their mothers, their fathers and their children."

"You're talking about people who have been incredibly traumatized," she said.

The day also marked another grim development -- an announcement that the death toll from the March 11 quake and tsunami had reached 10,804.

At least 2,776 people have been injured and 16,244 more remain missing, officials said.

In the coastal town of Otsuchi, survivors are weighing the prospect of rebuilding amid fears of another disaster.

The earthquake, the tsunami and a subsequent gas explosion left the town in ruins.

"I have a lot of friends afraid to stay in Otsuchi," resident Akita Sasaki said. "But I won't leave."

Sasaki said he lost his parents, his house, his job and most of his city.

But her survivor's guilt may outweigh her fear. Suzuki -- a nurse at a local hospital -- said she still hears screams of people she couldn't save when the tsunami hit.

The day the tsunami struck, Suzuki said she looked out of the window and saw the killer wave climb as high as the fourth floor window.

As patients and staffers rushed the stairs to reach the roof, Suzuki recalled hearing someone scream, "Auntie, I can't save you! I'm sorry!"

Suzuki said she was sorry too as she ran up the stairs. She called leaving patients behind "the biggest regret I have."

The tsunami flooded every floor of the hospital, killing 25. Fatalities included a dozen patients who drowned in their beds and three who died on the roof waiting to be rescued. Ten hospital staffers were also killed -- among them a man trying to get a satellite phone to call for help.

The man tossed the telephone to the roof just seconds before the tsunami swept him away, the hospital director said.

The tsunami reduced the hospital to piles of broken beds and medical equipment, I-V bags filled with mud and broken dry wall, and ceiling tiles piled in cluttered heaps underneath electrical fixtures dangling from the ceiling.

Suzuki and others, including a doctor who lost his own wife, now treat patients at a makeshift clinic.

"Whatever the situation, I will stay here," Suzuki told CNN. "Talking with the patients will be my cure."

For Suzuki and other survivors, the canceled tsunami advisory is a small ray of hope amid the ruins.