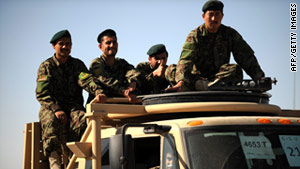 Afghan National Army soldiers ride in the back of a truck in Kandahar province, southern Afghanistan on March 23.
STORY HIGHLIGHTS
RELATED TOPICS

The officers were among a group of people in four vehicles traveling in the Chapa Dara district, said Kunar province Police Chief Khalilullah Zaiyee.

The captured were unarmed and on leave, he said.

A Taliban spokesman said there were no civilians among the group captured.

"We have got documents and evidence that shows all the 50 captured people are policemen and they have also (confessed) during the investigations too," Taliban spokesman Zabiullah Mujahid told CNN.

"We will take a decision about the captured policemen according to the situation and enemies' actions."

Mujahid described an earlier incident in a nearby area when another group of captured police officers were released from Taliban control after pledging not to work for the government again.

Police were working with province elders and religious scholars to negotiate the group's release, Zaiyee said.