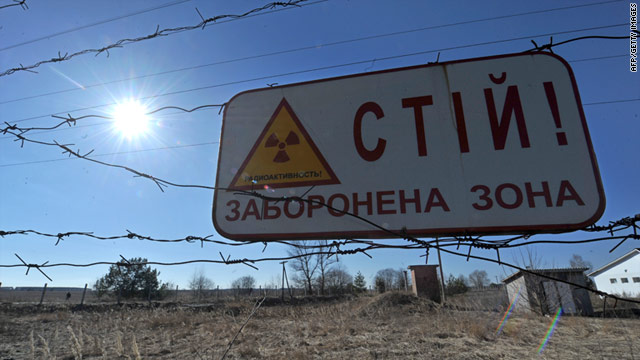 Only Chernobyl and the atomic bombing of Hiroshima and Nagasaki have provided definitive information on the effect of radiation.
STORY HIGHLIGHTS

(CNN) -- Japan's alarm over radiation found in spinach and milk has also raised questions, given that little is known about its effect on the human body.

While some tests have been done on animals, sparse information is available on how eating contaminated food affects people in the short and long term.

The main reason is the lack of research subjects, limited to those affected by the 1945 nuclear attacks on the Japanese cities of Nagasaki and Hiroshima and the 1986 Chernobyl nuclear plant disaster in the Ukraine, then a part of the Soviet Union.

But now Japan is looking for answers, all part of the ripple effect from the March 11 mammoth earthquake and subsequent tsunami that wreaked havoc on the Fukushima Daiichi nuclear power plant's six reactors and led to the release of unknown quantities of radioactive vapors.

On Sunday Japanese authorities slapped restrictions on milk and spinach that tested positive for radioactive cesium-137 and iodine-131 isotopes. In addition to the spinach and milk, very small amounts of radioactive iodine have been detected in tap water near the plant.

Dr. James Cox, an oncology professor at the MD Anderson Cancer Center in Houston, said he believes the radiation levels measured in these products pose a "nonexistent" immediate risk to humans, and "very low" long-term risk.

While studies were conducted in Japan after World War II, experts today are cautious to draw definitive conclusions on how the consumption of radiation-tainted food after the atomic bombings affected people. That is mostly because the research didn't focus as much on the thyroid gland and the presence of specific radioactive isotopes in food.

But Chernobyl has become a real-life laboratory for such studies, not only due to the presence of radiation but also the fact that iodine pills -- which are commonly prescribed for those with radiation contamination -- were not generally available to those in and around that stricken plant in the former Soviet Union.

That case is relevant in the current crisis because the iodine-131 isotope found in spinach and milk samples in Japan is a by-product of nuclear reactors, like the ones in Japan and Chernobyl.

Iodine-131 differs from regular iodine because it is radioactive. It collects in the human thyroid gland because the thyroid readily absorbs iodine and assumes the iodine-131 strain is like any other form, said Cox, an expert on the effects of radiation on the survivors of Nagasaki and Hiroshima.

The thyroid produces some of the body's most important hormones, which play a role in functions such as food metabolism and regulation of body temperature. To fight off iodine-131, doctors typically prescribe iodine pills that fill up the thyroid so there's no more room and force the iodine-131 out of the body.

Residents -- including many children -- drank milk contaminated with Chernobyl-produced iodine-131, said Cox. And experts believe this milk consumption contributed to cases of cancer, though it is notable that radiation contaminated other types of food as well.

The lack of access to iodine pills is less of a problem now. Cox says it might not be a bad idea for residents near Japan's Fukushima Daiichi nuclear power plant to take these pills as a precaution, despite their potentially harmful side effects, including allergic skin reactions and kidney damage.

"It might be a prudent thing to do, especially for the kids right around Fukushima," he said.

Iodine's eight-day half-life -- the time it takes for a radioactive isotope to decay by half -- means that in eight days, half of its radioactivity level will disappear. By contrast, cesium-137 has a half life of about 30 years, so it lingers for much longer. But even less is known on the impact of cesium-137, among other isotopes, when consumed by humans in food.

Experts do know that direct radiation exposure (without a conduit like food or water) can be deadly. Large doses of airborne exposure can cause death as soon as a few days. Lower degrees of exposure may result in heightened risk for developing cancer later in life, according to the Centers for Disease Control and Prevention.

As for the consumption of radiation-contaminated food, Cox said the studies indicate that cancer rates are higher for those who eat and drink such products than for the general population. Yet it is hard to draw hard-and-fast conclusions, especially since those who might drink contaminated milk around Chernobyl, for instance, might be exposed to radiation in other ways as well.

There's little evidence, too, that consuming radiation-contaminated food will cause genetic mutations that can be passed on to one's offspring.

"There's always an assumption that there would be a genetic risk, but that has never been shown in humans," said Cox.