Pentagon clears exit of some military family members from Japan 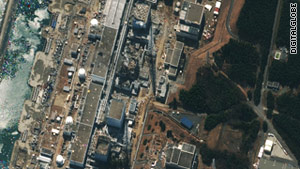 The authorization applies to family members on the island of Honshu, site of the crippled Fukushima Daiichi nuclear plant.
STORY HIGHLIGHTS

Tune in to "AC360º" tonight at 10 ET as Anderson Cooper and Dr. Sanjay Gupta report live from Japan on the quake and tsunami's catastrophic effects.

The potential number of evacuees is "in the thousands," Pentagon spokesman Col. Dave Lapan said.

Lapan said the authorization applies only to family members living on the island of Honshu -- site of the damaged Fukushima Daiichi nuclear power plant -- and will not cover those who are simply visiting.

The Pentagon has suspended all military family travel to Honshu. Families already on the island, which is also called the mainland, can be reimbursed for their travel home, Lapan said.

No military families will be allowed to travel to the island until the voluntary evacuation order is lifted.

The primary means of transporting family members back to the United States will be commercial aircraft, possibly including charter planes. If necessary, military aircraft will be used to fly the families back to America, Lapan said.

Approximately 200,000 people living within a 20-kilometer (12-mile) radius of the damaged nuclear plant have been evacuated. Those living 20 to 30 kilometers from the site have been told to remain inside. Authorities also have banned flights over the area.

Several countries, including the United States, have exercised greater caution, urging their citizens in Japan to evacuate or at least stay indoors if they live within 80 kilometers of the plant.