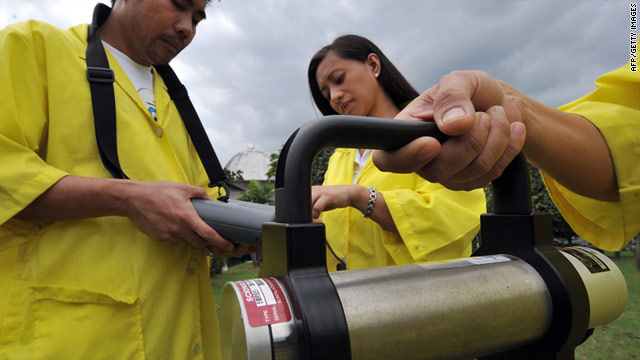 (CNN) -- Filipino authorities sought to calm panic unleashed among some residents after a hoax text message warned that radiation from Japan may affect the Philippines.

Concerns persist about nuclear reactors in Japan in the wake of a magnitude-9.0 quake and subsequent tsunami that struck the nation Friday.

But "there is no immediate danger of nuclear radiation in the Philippines," the nation's Department of Science and Technology said in a statement Monday.

The text message, which appeared to be a news flash from the BBC, spread like wildfire on Monday.

It said that the Japanese government had confirmed a radiation leak at nuclear plants in Fukushima Prefecture and that "Asian countries should take necessary precautions." It went on to warn that radiation may begin hitting the Philippines by Monday afternoon and instructed people to stay indoors and apply Betadine, an over-the-counter topical iodine-based antiseptic, on their neck area where their thyroid gland is located.

The message also warned against being in the rain, telling recipients to use an umbrella or raincoat "even if it's only a drizzle."

It was not immediately clear how many people received the message. Although some Filipinos dismissed it as a hoax immediately, others rushed to drugstores in search of Betadine.

The message also spread to some Filipinos living abroad, who became concerned about their relatives back home.

"I contacted my family, telling them not to go out, not to go anywhere," said Rowena Acquino, a Philippines expatriate in Jakarta, Indonesia. "The one who spread that news should be punished."

In its advisory, the Department of Science and Technology warned against believing in "hoax messages" and "rumors." "The advice circulating that people should stay indoors and wear raincoats if they go outdoors has no basis and did not come from the DOST or the National Disaster Risk Reduction Management Center," the statement said. It asked Filipinos to stop forwarding the message "so as not to sow panic among our people."

"It was an irresponsible thing to do, considering the anxiety and panic that it can cause the public," said Lyndon Daz, a resident of the Philippine capital, Manila.

But, like many, Daz said he is still concerned. "We know the dangers that this can cause when the spread of it and containment is unabated," he said. "I am not quite certain that the Philippines is distantly safe from the radiation effects of the Fukushima power plant."

Hoax text messages, warning of impending disasters and often quoting reputable news organizations like the BBC or even CNN, are not uncommon in the Philippines or Indonesia.

Some Indonesians also received the message on their mobile phones, on their BlackBerries and on social networking sites like Facebook, Indonesian executive Manda Azhairie said. "It's unfortunate that there are irresponsible people who take advantage of other people's misfortunes," she said.