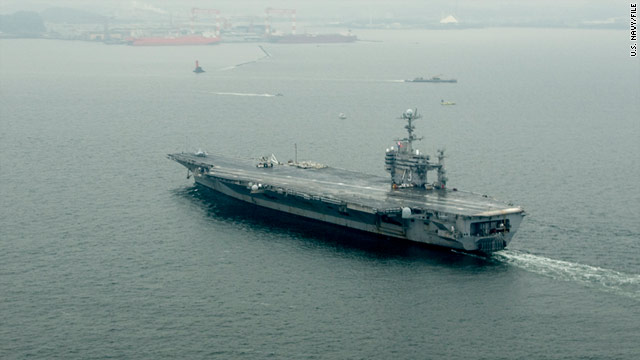 The USS George Washington was docked for maintenance in Yokosuka, about 175 miles (280 kilometers) from the plant in Okuma, when instruments detected the radiation at 7 a.m. Tuesday (6 p.m. ET Monday), the Navy said in a statement.

Personnel will limit outdoor activities and secure external ventilation systems there and at a nearby air facility in Atsugi.

"There is no appreciable health risk, and we are being very conservative in our recommendations," U.S. Naval Forces Japan Commander Rear Adm. Richard Wren said.

In a recorded video message, Wren said the additional radiation exposure over the past 12 hours had been less than one month's exposure to naturally occurring background radiation.

Workers are scrambling to cool down fuel rods and prevent a full meltdown in three reactors at the earthquake-hit Fukushima Daiichi plant.

Radioactive steam has been released intentionally to lessen growing pressure in the reactors. But radiation levels at the plant increased Tuesday to "levels that can impact human health," Chief Cabinet Secretary Yukio Edano told reporters.

The announcement came after an explosion at the plant's No. 2 reactor. In addition, Edano said, the building housing the No. 4 unit -- which had been shut down before Friday's earthquake -- was burning Tuesday morning,

On Monday the Navy said it was repositioning ships after tests had detected low levels of radioactivity on 17 U.S. Navy helicopter crew members that had been conducting disaster relief missions in Japan.

No further contamination was detected after the crew members washed with soap and water, the Navy said.

The Navy's Monday statement, however, provided some perspective, noting that the maximum potential radiation dose received by ship personnel when it passed through the area was "less than the radiation exposure received from about one month of exposure to natural background radiation from sources such as rocks, soil, and the sun."

CNN's Larry Shaughnessy and Bob Kovach contributed to this report.