Delivering babies after a tsunami 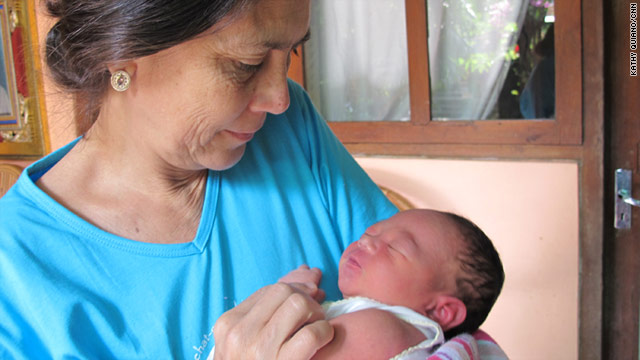 (CNN) -- The massive earthquake and tsunami that hit Japan on Friday spared the island of Indonesia, a nearby developing country that was devastated in 2004 by one of the deadliest tsunamis in history.

Helping after that disaster was CNN Hero Robin Lim. Lim is the founder of Indonesia's Yayasan Bumi Sehat health clinics, which provide free prenatal and birthing care to women in need.

Ebonne Ruffins: What's it like to work in Indonesia and, specifically, after the 2004 tsunami?

Robin Lim: In Indonesia, there is a great need for us because many mothers want the help of professional birth attendants but can't afford them. So they come to us.

It was not easy to start so grass-roots in Bali, completely reliant on donations, but we did it. And when the tsunami happened a few years later in Aceh, we were early responders. So many on the eastern coast lost everything, and it was very difficult to witness. But we had to be there for those who survived or were fighting to survive.

Ruffins: How do your teams provide maternal and infant care in the middle of a devastated area?

Lim: Because the devastation can ruin entire clinics and resources, we have to be prepared to treat them with limited materials. Instead of cutting the umbilical cord, for instance, we burn it -- especially in disaster zones, because it's something we can teach our midwives and doctors who've lost their instruments. Using scissors to sever the umbilical cord carries a risk of tetanus. If you burn the cord, there's just no risk of infection.

And outside of just knowing how to safely respond medically, we try to have respect for everyone's faith. We don't have any particular religion, and we'll honor all requests and faith traditions -- special songs, flowers or chants. No matter what they are or where we are, we honor these faiths. This helps the moms feel safe and supported with us.

Ruffins: You've delivered enough babies to repopulate another island. Have you learned anything from the people you've helped?

Lim: I've learned a lot. Quite often I cry tears of joy because I feel humbled. Once in a while, a baby is born that doesn't breathe. Normally CPR works, but sometimes no matter what you do, that baby just wasn't meant to make it. That really humbles us, because we have control over reducing risks for the mothers and babies but I have learned we don't have control over fate. There are so many more good days than bad, though.

When there is a long night and there is an emergency, the mothers just hang in there -- and the babies, too. They are so strong, and they push through -- literally. That's love. They have taught me that this world is really worth preserving. The babies come in so fresh and innocent, trusting and open to love. And if we can just give them a safe and gentle entrance into this world, then they will keep that ability to love and trust.